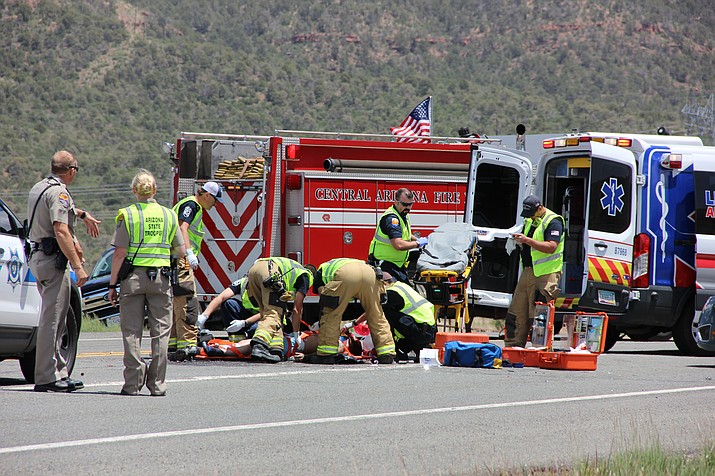 Emergency responders treat a seriously-injured man on Highway 89A after his motorcycle crashed into a sedan near Mingus Mountain midday Friday, May 17. (Max Efrein/Daily Courier)

A man sustained life-threatening injuries and had to be flown to a level 1 trauma center after his motorcycle crashed into a sedan along Highway 89A midday Friday, May 17.

Emergency responders prepare to load a man into a Native Air helicopter after the man was seriously injured in a motorcycle crash along Highway 89A near Prescott Valley midday Friday, May 17. (Max Efrein/The Daily Courier)

The crash occurred at about 11:15 a.m. just before the highway heads up Mingus Mountain on the Prescott Valley side. The motorcyclist was wearing a helmet.

Emergency responders treated the man's wounds at the scene before he was transported by helicopter for further treatment at Flagstaff Medical Center.

A woman in the sedan was transported to Yavapai Regional Medical Center for treatment of minor injuries.

Highway 89A was temporarily closed while medics treated the motorcyclist. One lane was reopened for alternating traffic at about 12:20 p.m. Traffic returned to normal at about 2:30 p.m.

The cause of the crash has not yet been released by police.