Be safe when lightning strikes during peak storm season 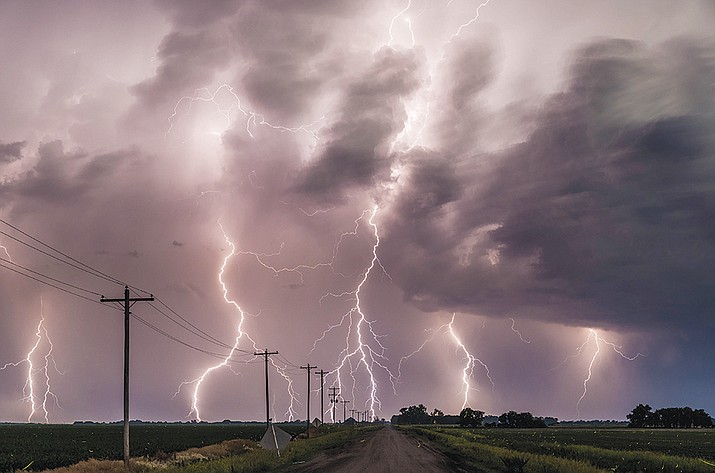 A change in seasons often brings about a change in the weather. Seasons marked by increased humidity in the air and warmer temperatures often usher in afternoon or evening thunderstorms — which are on the horizon for the Arizona monsoons in the next month.

And, with those thunderstorms come potentially dangerous lightning.

The National Weather Service says lightning strikes the United States roughly 25 million times a year, killing an average of 47 people each year. Worldwide, lightning kills as many as 2,000 people every year, states National Geographic. Even though the odds of being struck by lightning are low, certain factors put people at greater risk. Florida is considered the “lightning capital” of the U.S., so residents of the Sunshine State should always exercise extreme caution upon seeing lightning. Residents elsewhere also should be extra cautious when lightning strikes.

To stay safe, remember the mantra, “When thunder roars, go indoors.” In addition:

• Postpone outdoor activities if the weather forecast calls for thunderstorms. You also can use the 30-30 rule. After you see lightning, start counting to 30. If you hear thunder before you reach 30, go indoors. Suspend activities for at least 30 minutes after the last clap of thunder, offers the Centers for Disease Control and Prevention.

• Avoid open areas outside. Do not be the tallest object in a field or area. Also, stay away from isolated tall trees, utility poles and towers.

• If no shelter is available, crouch low with as little of your body touching the ground as possible.

• A car can be a safe place to stay if no other non-concrete shelter is available.

• Recognize that all thunderstorms produce lightning. Just because you canÕt see lightning doesnÕt mean itÕs not there.

• Get out of pools or other bodies of water. Water is an excellent conductor of lightning.

• The human body does not store electricity, says the Insurance Information Institute. Therefore, if a person is struck, you can safely offer first aid.

Lightning is no joke and never something to take lightly. Exercise caution whenever thunderstorms roll in or when they are in the forecast.

Grand Canyon hiker flown to Las Vegas hospital after lightning strike
Ask the Contractor: Top ways to prep your home for monsoon
Column: Be prepared for monsoon storms
Saving your devices from lightning strikes
It's Monsoon Time in Prescott