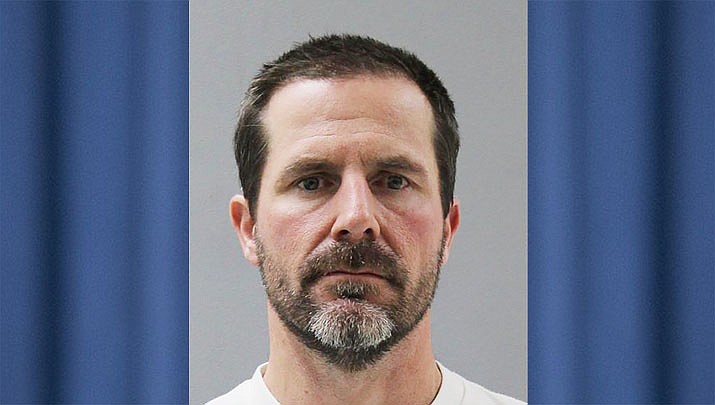 A Chino Valley man who was caught with methamphetamine and suspected “mimic pills” containing fentanyl on Nov. 1, 2018, has agreed to spend at least nine years in prison.

Christopher Livernois, 42, signed a plea agreement offered by the Yavapai County Attorney’s Office stipulating this amount of prison time on Monday, May 13, 2019, at the Yavapai County Superior Court in Prescott. He is set to be sentenced at 3 p.m., June 24.

Livernois was arrested after Partners Against Narcotics Trafficking (PANT) received information that he was in possession of a large amount of illicit drugs, PANT reported. Detectives found Livernois leaving a Prescott-area bar near 6th Street in a silver sedan on Nov. 1. They searched a backpack in the vehicle and found methamphetamine and a pill container with 55 blue pills marked M30 — later identified as mimic pills laced with fentanyl, PANT reported.

In the plea agreement, he was asked to plead guilty to the greatest offense, possession of methamphetamine for sale. His attorney, Adam Zickerman, said on Monday that the amount in his possession was 16 grams, which is the equivalent of about 64 doses. The agreement states he will serve nine years flat time in prison, meaning he is not eligible for early release.

Prior to this plea, Livernois already had an extensive criminal history (eight prior felonies) dating back to 2003, including a conviction for possession of dangerous drugs for sale in 2009.

Rather than be sentenced immediately after accepting the plea, Livernois requested a delay.

“He is part of an employment work program here and he wants to be able to stay in that for a little bit before being sentenced and transferred to the Department of Corrections,” Zickerman said to the presiding judge, Thomas Kelly.

Zickerman said Livernois also has family and medical issues that are going on that he would like to remain in Yavapai County for.

The state, represented by Lewis Citrenbaum, deputy county attorney with the Yavapai County Attorney’s Office, had no objection to putting off the sentencing for several weeks.