Editorial: The good, the bad of lawmakers’ changes to initiatives 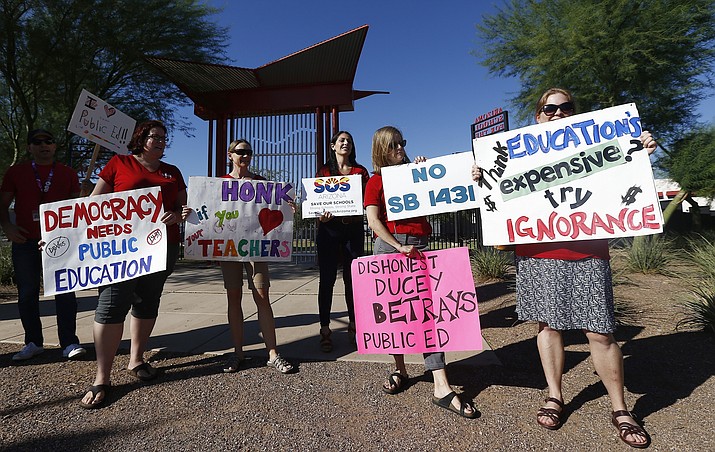 In this Aug. 24, 2017, file photo, members of Save Our Schools Arizona protest at the Arizona School for the Arts as Arizona Gov. Doug Ducey tours the school in Phoenix. (Ross D. Franklin, File/AP)

In the past week, the Arizona Legislature placed more hurdles in the path of voter initiatives.

Obstruction is the way critics are looking at it.

Actually, the measures are designed to fix a “perverted” system, as Rep. John Kavanagh, R-Fountain Hills, calls it. That’s because the initiative process – the ability of citizens to propose their own laws — has been taken over mostly by out-of-state millionaires.

Rep. Bob Thorpe, R-Flagstaff, said Senate Bill 1451 will “make it more difficult for wealthy people to come in and turn Arizona into their sandbox.”

That’s right, such as California billionaire Tom Steyer, who backed last year’s failed Proposition 127 that would have forced utilities to get more of their power from solar or renewable sources. However, who pays was unclear (more on that later).

Recent changes — still to be sent to the governor — would impose new requirements on those who actually go out and gather petition signatures. That includes registering with the Secretary of State’s Office and prohibiting petitions from being circulated by people who have been convicted of certain crimes.

Yet, Rep. Jennifer Longdon, D-Phoenix, accused Republican lawmakers of trying to undermine the petition process and make it more difficult, particularly for grass-roots organizations. “Save Our Schools Arizona did not have big money backers,” she said. “These were moms, dads, grandparents and everyday Arizonans who stood up to this legislative body and said ‘no.’”

Along those lines, we see the best initiatives come from the grass-roots level. Is it an uphill battle gathering thousands of signatures? Absolutely; it’s not supposed to be simple.

The more interesting part of the legislation would give the attorney general the power to alter the 50-word description of the measure that appears on each and every ballot. And the only remedy would be to sue; though, the approved ballot description becomes publicly available only days before ballots are set to be printed – not enough time to pursue a legal challenge.

Critics are calling it a “blatant power grab,” and point to the Prop 127 ballot language altered by the AG’s office to add that the renewable energy mandate would occur “irrespective of cost to consumers.” Those words were pivotal at the polls — and for this newspaper’s endorsements (The Daily Courier Editorial Board opposed Prop 127 because of the possible cost).

Still months later it is unclear why the words were altered.

For this part of the changes, we would prefer something we have called for over the years: Check the proposal’s legality and validity — and the petition wording — before petitions are circulated.

Senate Bill 1451 places doubt and a hole in the process. Set the wording in stone, if it were, before the first signature.

So, some good changes (requirements) and some not s o great (wording).

With the state budget now at center-stage, we’re not certain SB 1451 passes muster. It is at this point, all or nothing.