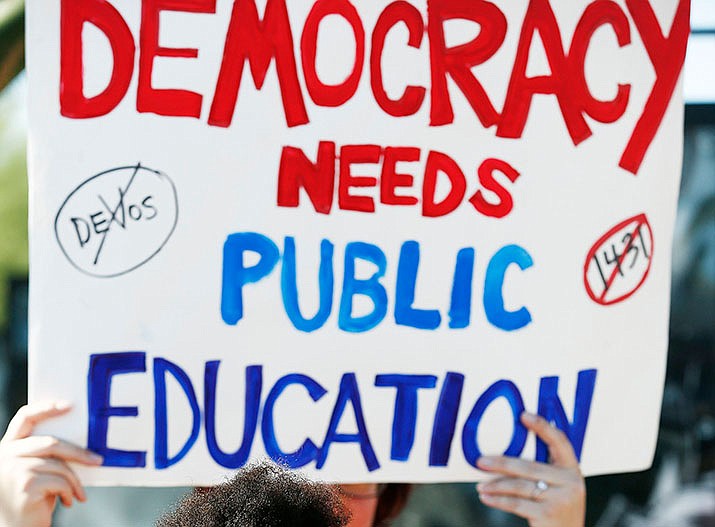 Ashley Perez, a student at the Arizona School for the Arts, speaks at a protest sponsored by Save Our Schools Arizona as Gov. Doug Ducey tours the school Thursday, Aug. 24, 2017, in Phoenix. Ross D. Franklin/AP, file)

PHOENIX — Republican lawmakers voted last week to put some new hurdles in the path of groups that seek to propose their own laws and constitutional amendments.

At a bare minimum, Senate Bill 1451 approved Wednesday, May 8, on a party-line vote by the Republican-controlled House, imposes new requirements on those who actually go out and gather the signatures. That includes registering with the Secretary of State’s Office and prohibiting petitions from being circulated by people who have been convicted of certain crimes.

Rep. Pamela Powers Hannley, D-Tucson, pointed out that the Republicans who want that change in the initiative process are not applying those same rules to those who circulate their own nominating petitions.

In this Aug. 24, 2017, file photo, members of Save Our Schools Arizona protest at the Arizona School for the Arts as Arizona Gov. Doug Ducey tours the school in Phoenix. (Ross D. Franklin, File/AP)

And Rep. Jennifer Jermaine, D-Chandler, accused Republican lawmakers of trying to undermine the petition process and make it more difficult, particularly for grass-roots organizations, because they are unhappy with the fact that voters gathered petitions and overturned their 2017 proposal to expand who is eligible for vouchers of taxpayer dollars to attend private and parochial schools.

“Save Our Schools Arizona did not have big money backers,’’ she said. “These were moms, dads, grandparents and everyday Arizonans who stood up to this legislative body and said ‘no.’ ’’

But the potentially greater change would give the attorney general the unilateral power to alter the 50-word description of the measure that appears on each and every ballot. And the only remedy for someone who disagrees would be to sue.

That, however, may not be a true recourse: The approved ballot description generally becomes publicly available only days before ballots are set to be printed. And that may not be enough time to pursue a legal challenge.

He said current law gives the attorney general the power only to approve or reject the language crafted by the secretary of state. That, said Friese, requires a back-and-forth between the two elected officials to come up with something on which both can agree.

The change would cement into law what happened last year when a key aide to Attorney General Mark Brnovich altered the description of Proposition 127, an initiative which would have required that half of all power generated in Arizona by 2030 come from renewable sources. Beau Roysden added language that said that the renewable energy mandate would occur “irrespective of cost to consumers.’’

That was precisely the argument Arizona Public Service was using in its multi million-dollar campaign to quash the initiative. In fact, within days of the change, a picture of the ballot with that new language highlighted showed up on APS-financed TV ads.

Eric Spencer, who was state elections director at the time under Republican Secretary of State Michele Reagan, called the new verbiage “eyebrow raising’’ and suggested it comes with “legal and political risks.’’ But Spencer did not challenge the new wording.

Spencer, now an attorney in private practice, told Capitol Media Services on Wednesday that Brnovich probably has the power to make changes, especially on strictly legal matters. But he questioned how far that goes when making “policy changes’’ in descriptions.

“Any disagreement between the two offices should be worked out through negotiation, assuming there is still time before the ballot and publicity pamphlet printing deadline,’’ Spencer said.

That’s precisely what Rep. Mitzi Epstein, D-Tempe, said should occur — and will not occur with the change in the law. She said that 50-word description on the ballot is often the only language that some voters ever see.

What makes the change in SB 1451 so critical is that the last election resulted in Democrat Katie Hobbs being elected as secretary of state with Republican Mark Brnovich returned to office. Putting this language into statute ensures that, at least for the next four years, it would be the Republican who gets the last word.

Ballot descriptions aside, Democrats said SB 1451 is just another attempt by Republicans to make it more difficult to put measures on the ballot.

Prior changes approved by the GOP-controlled Legislature include a ban on paying petition circulators on a per-signature basis — another provision that lawmakers have not applied to their own petitions — and requiring that petitions be in “strict compliance’’ with all election laws. That latter change overturned court rulings which said that petitions need be only in “substantial compliance,’’ a standard that allows measures to go to the ballot despite technical errors.

These changes, supported by the Arizona Chamber of Commerce and Industry, followed a series of voter-approved measures opposed by the business community, ranging from a ban on leghold traps on state lands and allowing the medical use of marijuana to creating a state minimum wage higher than what is required by federal law.

Rep. John Kavanagh, R-Fountain Hills, said the new changes are appropriate. He said that the initiative process -- the ability of citizens to propose their own laws -- has been “perverted’’ because it has become a tool of out-of-state millionaires. That specifically includes California billionaire Tom Steyer who funded Proposition 127.

And Rep. Bob Thorpe, R-Flagstaff said SB 1451 will “make it more difficult for wealthy people to come in and turn Arizona into their sandbox.’’

But Rep. Raquel Teran, D-Phoenix, said the supporters of this change are not the groups who have mounted their own initiative drives when the Legislature has failed to act but the corporations and special interests that unsuccessfully fought those voter-approved changes.

The new law, if approved by the Senate and signed by the governor, also would affect pending initiative drives to put issues on the 2020 ballot. Of note, that includes a constitutional proposal to require full disclosure of the true sources of money spent on political races, ending the ability of some “dark money’’ groups to refuse to disclose their donors.

“I’ve heard about the California billionaire,’’ he said, “But we haven’t heard about the brothers from Kansas,’’ referring to Charles and David Koch, the conservative billionaires who have funneled money through various groups into campaigns in Arizona.

Editorial: The good, the bad of lawmakers’ changes to initiatives
Measure that could make it easier to block voter initiatives heads to Gov. Ducey
AG Brnovich alters language of ballot description for Prop. 127
Senate bill would place new hurdles in front of citizen initiatives
Republicans vote for two more limits on initiatives