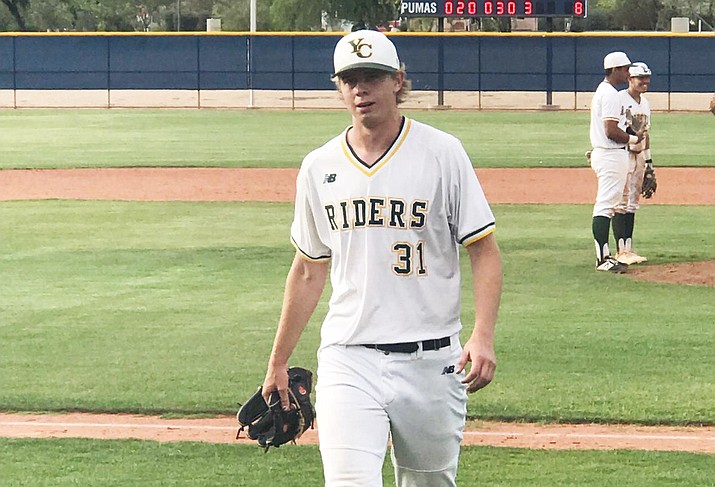 Trey Morrill (31) walks to the dugout after being removed in the eighth inning. The freshman went 7-1/3 innings pitched, allowed four hits and one unearned run on 10 strikeouts in an 8-1 win over Central Arizona on Thursday, May 9, 2019, in Phoenix. Game two of the NJCAA Region I Playoff finals is scheduled for Friday, May 10, at Paradise Valley Community College. First pitch is set for 2 p.m. (Brad Clifford/Courtesy)

PHOENIX — Trey Morrill allowed only one unearned run and struck out 10, Channy Ortiz had three hits and the Yavapai College baseball team took game one of the NJCAA Region I finals in an 8-1 win over Central Arizona on Thursday afternoon.

It is the fifth win in the last six games for the Roughriders (37-17), which are just one win away from a berth into the NJCAA West District Championship Tournament.

Morrill (8-3) needed 111 pitches to get into the eighth inning Thursday and had no problems carving up a Vaqueros lineup that ranks near the bottom nationally in strikeouts (162nd).

“He pounded the strike zone, he was good,” Yavapai College skipper Ryan Cougill said in a phone interview Thursday. “He was throwing fastballs for strikes and expanding the zone when he needed to.”

In 7-1/3 innings pitched, the freshman from Fruita, Colorado, allowed only four hits and walked one to earn the victory.

“I was able to establish my fastball early. And my slider was working, so the fastball-slider combo really helped today,” Morrill said.

He also credited his offense for giving him run support.

“Anytime you get run support like we did today … you can build off that, pitch with a lead and pitch with confidence,” Morrill said.

Offensively, Yavapai pieced together two three-run rallies in the fifth and seventh innings to separate themselves from Central Arizona (40-19) in game one.

In the fifth, Christian Encarnacion-Strand sparked a three-run rally with an RBI single that scored Dalton Daily, then scored on a sacrifice fly by Gianni Tomasi. Matt Novis capped the rally with an RBI double to score Channy Ortiz, making it 5-1.

Novis later doubled and scored on a Logan Williams triple in the seventh to make it 8-1.

Encarnacion-Strand said hitting in the leadoff spot is “new” to him.

“It is what is best for our team and that’s what matters most,” he said via text message Thursday, adding the Roughriders need to keep it light if they are to win tomorrow.

“I think we just need to have fun and keep playing solid baseball,” Encarnacion-Strand said.

Cougill said there was no surprise when his club plated eight runs Thursday against one of the top pitching staffs in the country, at least on paper.

“We worked at bats, ran the bases well and were super aggressive,” Cougill said. “We put a lot of pressure on them.”

Central Arizona pitchers combined to sport a 2.87 ERA before Thursday’s game, which was ninth in the country. They also held lineups to a .217 clip (6th) prior to game one in Phoenix.

The Roughriders scored a total of 45 runs (7.5 per) in six games against Central Arizona this season.

Central Arizona’s only scoring play came in the top of the fourth when Hunter Jump recorded an RBI single to score Emmy Ordonez. The Vaqueros had only six hits as a team and left nine runners on base.

Yavapai and Central Arizona will face each other in game two of the Region I finals Friday at Paradise Valley C.C. in Phoenix.

The Roughriders are expected to send Dominic Hamel (6-4, 3.76 ERA) to the mound. First pitch is scheduled for 2 p.m.

All-Time: Yavapai is 87-77 against the Vaqueros.

Last Meeting: Yavapai College won game one of the NJCAA Region I finals 8-1 on Thursday, May 9.

The Setting: The Roughriders are 21-13 away from Roughrider Park this season.

Fun Fact: The winner of this series advances to the NJCAA Western District Finals at a site not yet announced.