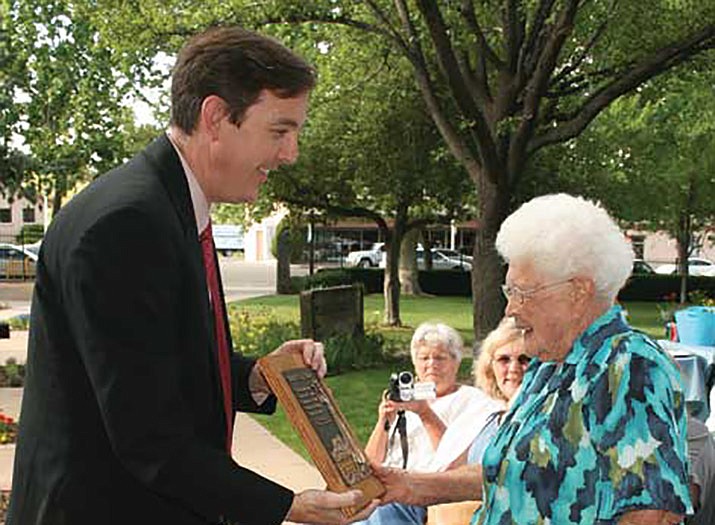 Since 1984, the Sharlot Hall Award has recognized an Arizona woman for her outstanding contributions to the understanding and awareness of Arizona and its history. Nominations for this lifetime achievement recognition are being accepted by the historical society.

The Sharlot Hall Award has become the pre-eminent counterpart to the Arizona Women’s Hall of Fame, and is presented annually to a living Arizona woman in recognition of her contribution to the understanding and awareness of Arizona and its history.

The award presentation will be made during the Western History Symposium on Aug. 3 at the Prescott Centennial Center.

The Sharlot Hall Award is named in honor of museum founder Sharlot Mabridth Hall (1870-1943), who achieved fame as a poet, author, activist, and first territorial historian – the first woman to hold public office in the Arizona Territory.

As a young woman, Hall saw the need to save Arizona’s history. By the early 1900s as frontier settlers were passing, much of their heritage and stories was being lost. She traveled Arizona’s frontier collecting Native American and pioneer material, oral histories, artifacts, family documents, and working to preserve Arizona’s historic past.

In 1927, she began restoring the first Territorial Governor’s residence and offices, and moved her extensive collection of artifacts and documents into it. For the remainder of her life, she continued to fight for women’s rights and to preserve the history and heritage of her adopted home. Her efforts inspired others to continue contributing to the preservation of early Arizona and American history.

Last year’s honoree was Catherine H. Ellis of Oracle, recognized for her wide-ranging work as a writer, author and historian. Ellis was honored for uncovering, documenting and interpreting Arizona history for more than 40 years, with an extensive list of credits associated with the Mormon influence on Arizona.

Other recipients include Nancy Kirkpatrick Wright (2016) for her lifetime of research work as an historian and author; Winifred “Winn” Bundy (2015) of the Singing Wind Bookshop near Benson for her literary preservation; and Sylvia Neely (2014) for her research and preservation. Additional recipients include Dr. Reba Wells Grandrud (2013), Jayne Peace Pyle (2012), Heidi Osselaer (2011), Nancy Burgess (2010); and 27 other Sharlot Hall Award honorees.

Deadline for nomination submission is May 31. Nomination forms are available on the Museum website at www.sharlot.org/sharlot-hall-award or by phone at 928-277-2003.