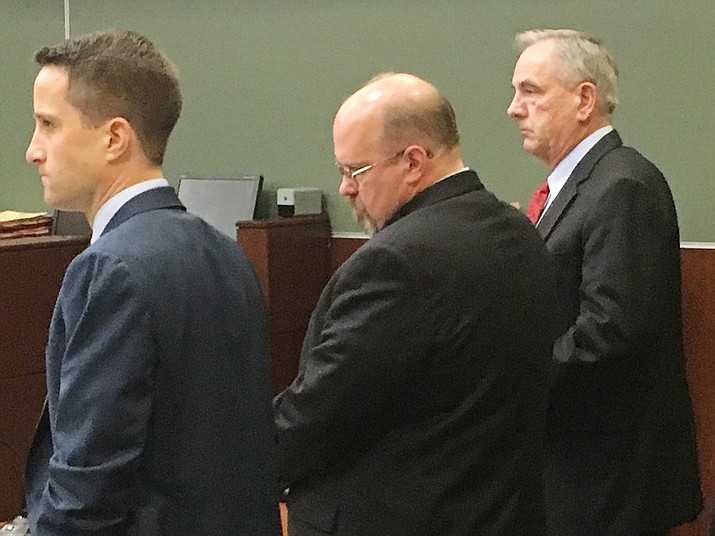 Thomas Chantry, a former Prescott pastor, listens as the verdict is read in Yavapai County court on Wednesday, May 8, 2019, in Camp Verde. He was found guilty on four counts of child molestation. (Vyto Starinskas/VVN)

One by one in open court, the members of the 12-person jury confirmed their guilty verdict for each of the charges after completing nearly 14 hours of deliberation over two days.

In her closing arguments, Deputy County Attorney Susan Eazer used a statement from a victim who testified during the trial:

“If you tell, God is going to punish you. If you tell, you’re not going to go to heaven,” Chantry told his 11-year-old victim, Eazer explained to jurors.

Eazer said the jurors should believe the witnesses’ testimony, including that of the victim in this case, who is now a grown man with children.

However, Chantry’s attorney, Ryan Stevens, argued in his closing statement that the witnesses for the victim brought “personal agendas, family agendas, biases and prejudices.” He said the witnesses contradicted themselves when compared to their testimony in previous cases and cited several examples.

Stevens argued that the four molestations charges that Chantry was facing are not about allegations of “spanking.”

“Excessive spanking: That’s for another courtroom, on another day,” he said. This case is about the “touching” of the victim in certain body areas, he said.

Stevens also questioned the quality of the witnesses’ memories of alleged incidents from more than 20 years ago.

The defense attorney also said there was no medical or scientific evidence to corroborate the victim’s testimony, and a thorough police investigation had not been conducted.

During the aggravated circumstances stage of the trial immediately after the verdict, the jury determined that Chantry caused emotional harm to the victim.

The victim felt shame, confused, felt it was his fault, Eazer said. The victim felt fearful the defendant was going to do this to other children, Eazer argued.

She also said the victim was angry at his parents for not protecting him from the minister.

Stevens argued against the aggravated circumstances verdict because the state did not present psychological evidence that Chantry caused emotional harm to the victim.

But the jury agreed with Eazer to revoke bail, and after the hearing the minister walked out the side door of the courtroom with officers behind him.

Chantry’s sentencing will be July 19.

The minister has been accused of multiple instances of abuse and molestation involving the children in his former congregation.

In June 1995, Chantry became the new pastor at Miller Valley Baptist Church. Accusers and their families reported incidents of abuse to the church, but no reports were made to the police until 2015.

During a trial last summer, a Yavapai County Superior Court jury deadlocked on the four molestation charges, causing a retrial.

Chantry is facing nine other charges involving child abuse and molestation in another case.