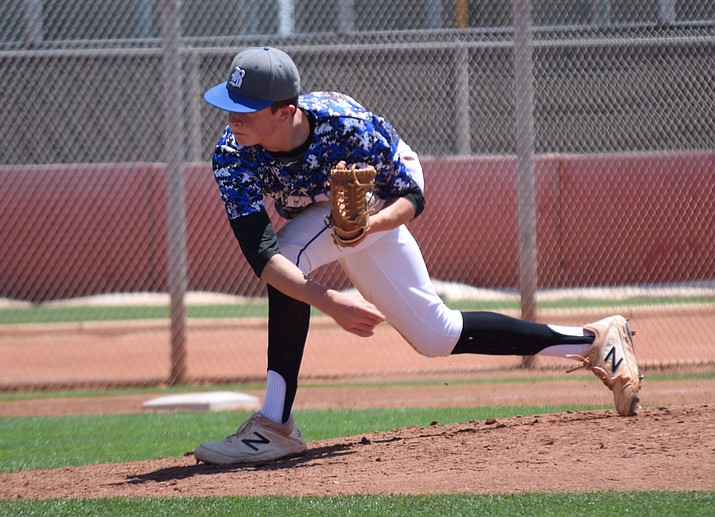 Bagdad freshman Connor Watson was the winning pitcher in the Sultans’ 19-0 run-ruled victory over Mohave Accelerated in the 1A state tournament quarterfinals May 4 at the Goodyear Baseball Complex. Watson tossed a one-hit shutout, registering 10 strikeouts and issuing no walks, in five innings for the defending 1A state champs. (Courtesy/Sylvia Andrews)

GOODYEAR — By any measure, it’s been a phenomenal two-year run for the Bagdad baseball program, which has dominated the 1A ranks.

The defending 1A state champion and currently No. 1-seeded Sultans, who shut out Superior, 10-0 in a run-ruled five innings, in last year’s title game, have earned a rematch with the Panthers, seeded fourth, in the 1A state tournament semifinals at 6:30 p.m. Friday, May 10, at the Goodyear Baseball Complex’s Indians Field No. 5.

In the bottom half of the state’s small-schools bracket, No. 6 Baboquivari battles No. 2 Mogollon in the other semifinal at 6:30 p.m. May 10, at the complex’s Indians Field No. 6.

“Making the semifinal round of the state playoffs validates what you have been doing all year,” Bagdad coach Brent Callen said. “All four teams playing in the semifinals are quality teams and deserve to be there.”

To reach this point of the 2019 1A state tournament, Bagdad – located in the small mining community of the same name in western Yavapai County – rolled past No. 16 Red Mesa, 15-1, in the first round on May 3, and pounded No. 9 Mohave Accelerated, 19-0, in the quarterfinals on May 4. Both games were played in Goodyear and ended on the run rule in five innings.

Versus Red Mesa, Bagdad was led by starting pitcher Tony Ventura, who allowed one run on two hits, struck out 12 and walked two in five frames en route to the victory.

Against Mohave Accelerated, Watson was the winning pitcher, tossing a one-hit shutout with 10 strikeouts and no walks.

As far as semifinal opponents in this tournament are concerned, the Sultans shut out Superior, 7-0, at home on March 28, and they blistered Baboquivari, 14-4, at home on April 12. Callen said Bagdad’s not overlooking Superior.

“We know that facing Superior will be a test for us,” the coach added. “They are looking to knock us out and they will come prepared.”

However, Bagdad hasn’t met Mogollon, the Central region titlist that finished with a 12-2 mark in power-point games. Mogollon’s losses came toward the beginning of the season, versus highly-ranked 2A foes Alchesay and St. Johns.

Superior (13-3 in power-point games) has lost only twice since losing to Bagdad on March 28. The Panthers succumbed in a pair of one-run games, 9-8 versus 1A No. 3 Ray on April 16, and 7-6 at No. 13 Arete Prep on April 19. Ray lost to Baboquivari (12-5) in the state quarterfinals, and Superior avenged its regular-season loss to Arete Prep with an 8-0 win in the opening round on May 3.

In last year’s state tournament, Bagdad outscored its four opponents by a combined 40-0. Through its first two games of this year’s tournament, the Sultans have been as dominant, if not more so, compiling a 34-1 tally.

“The key to repeating [as state champs] is having the belief that we can,” Callen said, “and knowing that the rest of the team is there to pick you up.”

The winners of Bagdad-Superior and Boboquivari-Mogollon will face off in the state championship game at 4 p.m. Monday, May 13, at Diablo Stadium, 2200 W. Alameda Drive, in Tempe.

Admission into the 1A state tournament costs $10 per adult, and $5 per student with a high school ID, active military member or senior citizen (ages 62 and older). Children ages 5 and younger get in free.