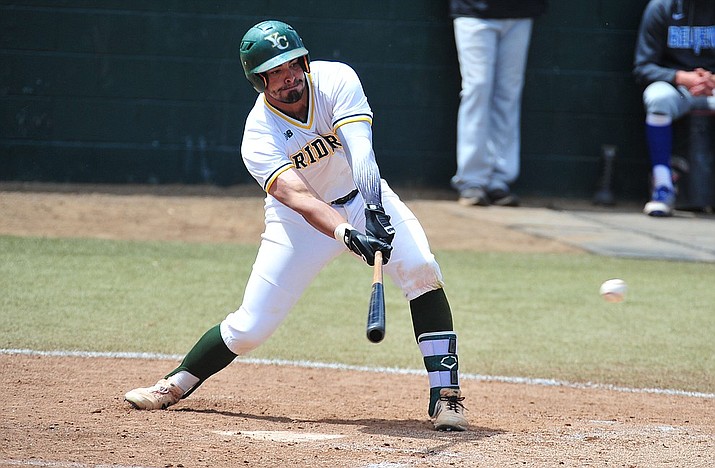 Christian Encarnacion-Strand makes contact April 17 in Prescott. The freshman was 2 for 4 with a home run in a 6-4 victory over South Mountain in Game 3 of the NJCAA Region I Playoff semifinals Saturday, May 4, 2019, in Phoenix. (Les Stukenberg/Courier, file)

PHOENIX — Christian Encarnacion-Strand hit his NJCAA-leading 21st home run of the season and the Yavapai College baseball team advanced to the Region I Playoff finals with a 6-4 win over South Mountain on Saturday afternoon.

The No. 3-seeded Roughriders (36-17, 24-14 ACCAC) take the best-of-three semifinal series 2-1 after South Mountain thwarted their efforts for a sweep Friday with a 7-2 victory, forcing a Game 3 rubber match.

Encarnacion-Strand is now tied atop the national leaderboard in home runs (21) with Cael Baker of Wabash Valley College (Illinois).

The freshman third baseman was 2 for 4 with an RBI and two runs scored Saturday. His home run came at a good time for the Roughriders, who led 5-4 in the top of the sixth before Encarnacion-Strand’s blast.

“It was a no-doubter,” Yavapai skipper Ryan Cougill said. “Christian, he’s a clutch performer. He really prepares himself well.”

Yavapai scored early and often, piecing together a three-run rally in the top of the second inning.

Will Long sparked the rally with a single and scored on an RBI triple by Cody Holtz.

Tyler Boggs ran for Holtz and scored when Rocky Botello reached on an error. Botello later came around to score on a wild pitch to make it 4-1 Roughriders.

Cougill said his offense put pressure on South Mountain “all day,” with chances to score in nearly every inning.

On the mound, William Sierra received the nod to start, but lasted only two innings after he rolled his ankle attempting to cover home plate in the bottom of the second inning.

Although he finished out the frame and was removed for precaution, Cougill said it’s only a minor injury and expects the 6-foot-1 right-hander to be ready for next week.

Riley Egloff came in to relieve Sierra and was brilliant, finishing the game allowing only five hits and two runs (one earned) with five strikeouts in seven innings pitched.

“You need a moment like that from somebody to step up if you’re going to win those types of games, and today it was him,” Cougill said.

After No. 4-seeded Central Arizona upset No. 1 Cochise in their half of the Region I Playoff semifinals with a two-game sweep, the Roughriders will host the Vaqueros (40-18, 24-14 ACCAC) next week in the finals.

“Central Arizona is a talented team,” Cougill said. “We match up with them well. … It should be a good series.”

The best-of-three series begins Thursday, May 9, at Roughrider Park in Prescott. The two clubs have played each other six times this season, winning three games apiece.