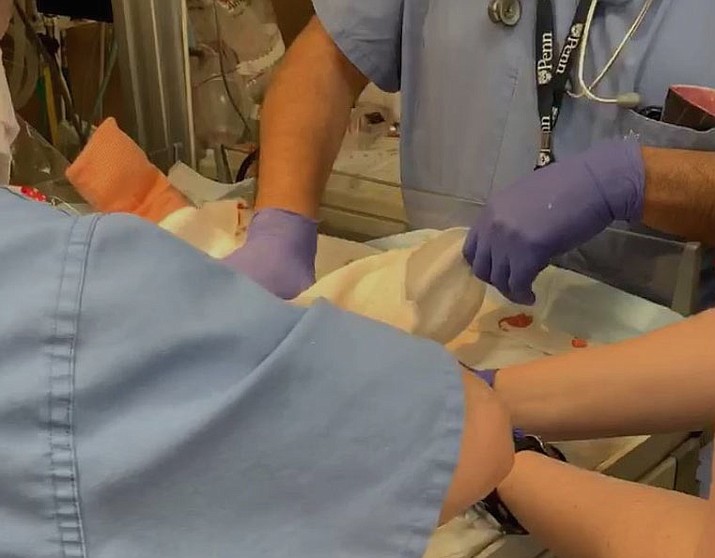 An Arizona couple is accusing a hospital of negligence after their newborn daughter was dropped after delivery. (Facebook video screenshot)

CHANDLER — An Arizona couple is accusing a hospital of negligence after their newborn daughter was dropped after delivery.

Monique and Derrick Rodgers, who live in the Phoenix suburb of Chandler, told TV stations they posted video from the Feb. 14 incident on Facebook this week out of frustration.

The 12-second clip shows their premature daughter slipping out of a worker's hands, falling less than a foot and landing on a table.

As of Friday, it had garnered more than a million views.

The couple says the hospital has not apologized and they want to know if the baby's fall is the cause of a small head injury revealed in an ultrasound.

The Rodgers did not respond Friday to messages and emails from The Associated Press seeking comment.

Chandler Regional Medical Center said in a statement that it cannot comment but patient safety is always a top concern.

My twin girls were born 2/14/19 at Chandler Regional in Chandler, AZ and my daughter Morgan was dropped on her head due to the negligence of the staff. I was never notified she was dropped nor were there any tests done due to them dropping her. I would like to prevent this from happening to other children being born at this hospital. ***EDIT*** I forgot to mention that a she spent a total of 12 days in the NICU due to her being 3lbs 4oz when born. A head ultrasound was done on day 5 and I was also not notified that this was being done due to her low birth weight and I was never given the results of this test. She has a grade 1 hemorrhage on the left side of her brain and I am not sure if that was due to her being dropped or her low birth weight. I did not find out that this test was done and the results of this test until this past Saturday when I brought up a different concern to her doctor. Please share my video.