Two more arrested in theft of debit card from elderly Dewey man
Father and son had been arrested, charged in March 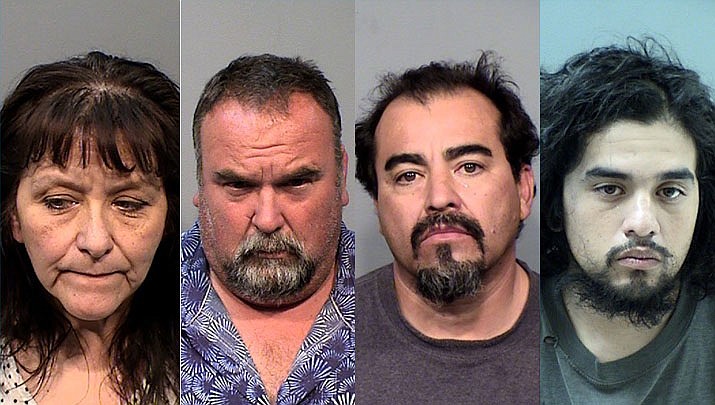 Two additional suspects have been arrested in a case involving a debit card stolen from an 86-year-old Dewey man earlier this year, according to the Yavapai County Sheriff’s Office.

Yavapai County Detectives say sometime between Feb. 25, 2019, and March 1, 2019, Donna Marie Madden took the victim’s debit card from his wallet in a group home in the 1200 block of Tapadero Drive in the Prescott Country Club subdivision of Dewey-Humboldt, according to a YCSO release Wednesday night.

Madden gave the debit card to Robert Urzua, and with John Steven Hagge they went to several businesses, purchasing more than $974 worth of merchandise with the card, according to a YCSO release.

Robert Urzua then gave the card to his son Alex Urzua, who used it to purchase more than $200 worth of gas from a gas station in Dewey-Humboldt, the release states.

Detectives have been able to link all parties to the crime from start to finish, until the card was canceled by the victim.

Madden was arrested Tuesday on complaints including Theft of Credit Card from Vulnerable Adult, Theft of a Credit Card, Transfer of a Credit Card, Fraudulent Schemes and Artifices, and Taking Identity of Another Person. She remains in the Camp Verde Detention Center on a $10,000 bond, the release states.

YCSO reported Monday, March 18, that Robert Urzua, 50, and Alex Urzua, 24, had been arrested in the case.

YCSO reported that deputies had spotted a white truck in Humboldt on March 16 that matched the description of a vehicle that Alex Urzua drives.

“Deputies conducted a traffic stop and Alex was the driver,” a news release stated, adding that deputies found a methamphetamine pipe, a Burger King gift card (allegedly purchased with the victim’s stolen bank card), methamphetamine packaging in the form of 100 small plastic baggies, and gas cans in the bed of the truck consistent with what was seen in a Chevron security video.

Alex Urzua was arrested and booked into the Yavapai County jail in Camp Verde on charges of fraud, fraud schemes, theft, and possession of drug paraphernalia, the release stated.

As the investigation continued, deputies determined that most of the items purchased with the victim’s stolen bank card were for repairs at Robert Urzua’s home, and that other stolen property would likely be found inside.

YCSO obtained a search warrant for Robert’s home in a Humboldt neighborhood. “When the warrant was served, Robert refused to come to the door and was found hiding inside a locked closet,” the release stated. “Once outside, he failed to follow directions and reasonable force was used to take him into custody.”

The release added that a search of the home revealed items from Hobby Lobby and Home Depot, allegedly purchased with the victim’s bank card. Deputies reportedly also seized a methamphetamine pipe.

They arrested Robert Urzua on charges of fraud, theft, fraud schemes, possession of drug paraphernalia, and possession of marijuana. They also discovered he was on active probation and was out on bond regarding an unrelated case.