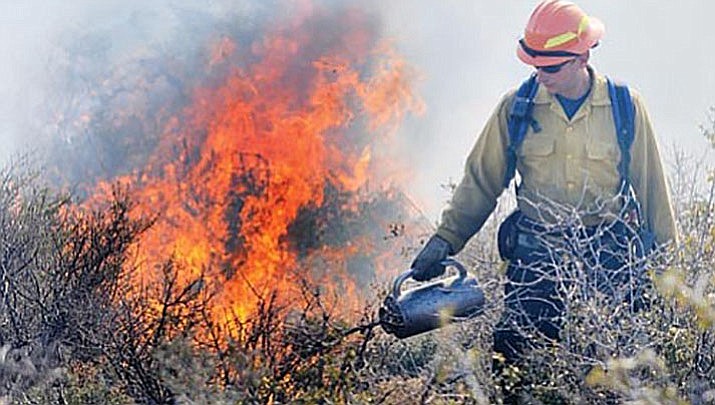 The Groom Prescribed Burn is scheduled for Thursday, May 2, through Friday, May 10, if weather conditions are favorable, according to the Bradshaw Ranger District.

Fire managers in the district plan to burn approximately 223 acres in an area 4 miles south of Prescott along Maripai Road (T13N, R2W, S33). The vegetation consists mainly of ponderosa pine and brush, and nighttime smoke will impact Ponderosa Park, Prescott and Groom Creek, officials said in a press release.

Fire mangers are aware of the special use events happening this weekend and do not anticipate smoke impacts to high-use areas within the Prescott Basin, the release states. If weather conditions are not favorable, the prescribed burn could be delayed.

The burn will reduce hazardous fuels that will help decrease the threat of high severity, high intensity wildfire to the public, adjacent private property and communities, while improving watershed, wildlife habitat, and forest health, officials said.

In the interest of safety, Prescott National Forest visitors are reminded to obey all traffic signs and use caution when traveling in the vicinity of the prescribed fire burn units, as firefighters and fire-related traffic will be in the area. Drivers should be prepared for short delays adjacent to the burns on Forest Service roads.

Prescribed fires are an effective tool for restoring fire-adapted ecosystems, according to the Forest Service. The burns mimic natural fires by reducing hazardous fuels accumulations, and reintroduce fire into a fire dependent system; recycling nutrients and increasing habitat diversity.

The fires are managed with firefighter and public safety as the first priority.

All prescribed fire activity is dependent on the availability of personnel and equipment, weather forecasts, fuels moisture levels and conditions that minimize smoke impacts as best as possible and approval from the Arizona Department of Environmental Quality (www.azdeq.gov).

Residents can get additional fire information via the following: