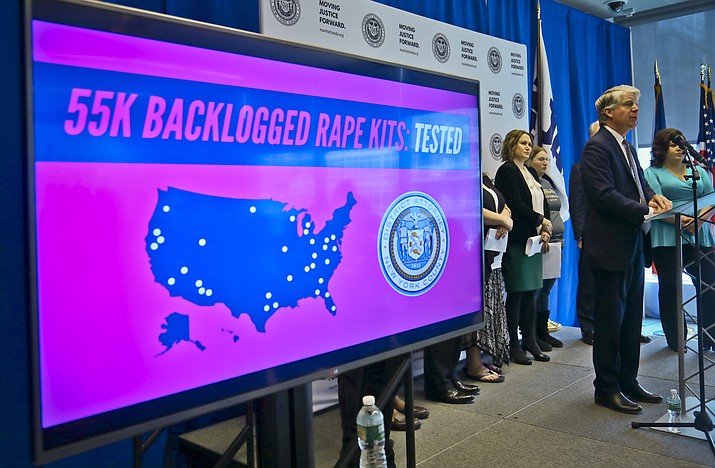 PHOENIX — The testing of thousands of rape kits in Arizona's backlog has led to more than two dozen arrests and nearly as many convictions, authorities said.

The Arizona Sexual Assault Evidence Collection Kit Task Force had recorded a backlog of 6,400 untested kits throughout the state in 2016, with some cases dating back decades, the Arizona Republic reported last week.

The Maricopa County attorney's office and the Tucson and Tempe police departments have since tested more than 5,000 of the kits that contain possible DNA evidence in sexual assault cases.

The testing has led to more than 30 arrests and 21 convictions. Nearly half of the tested kits have resulted in DNA matches that have been added to the FBI's Combined DNA Index System — a nationwide database.

Funding from the New York County district attorney's office and the U.S. Justice Department has been credited with pushing the Arizona agencies to test the kits.

Tucson got $1 million in initial funding, while Tempe received more than $363,000, and Maricopa County got $1.9 million. The Phoenix-area prosecutors later received an additional $2.7 million to cover testing as well as the costs of hiring staff to specifically handle sexual assault cases, said Amanda Steele, spokeswoman for the attorney's office.

Maricopa County prosecutors expect to clear their backlog before the end of the year.

The untested kit backlog in Tempe has been cleared, said Detective Lily Duran, police spokeswoman. The department is still working through 104 DNA hits produced from the tests.

"What we found immediately after testing kits from the (district attorney of New York County) grant was that DNA pops up in multiple results and this person who pops up in multiple kits is a serial rapist," Wilson said. "That — coupled with a better understanding of the effects and memory — has really changed the way we do sexual assault investigations."

The Tucson testing led police to Nathan Loebe, who was convicted in February of raping seven women between 2003 and 2015.