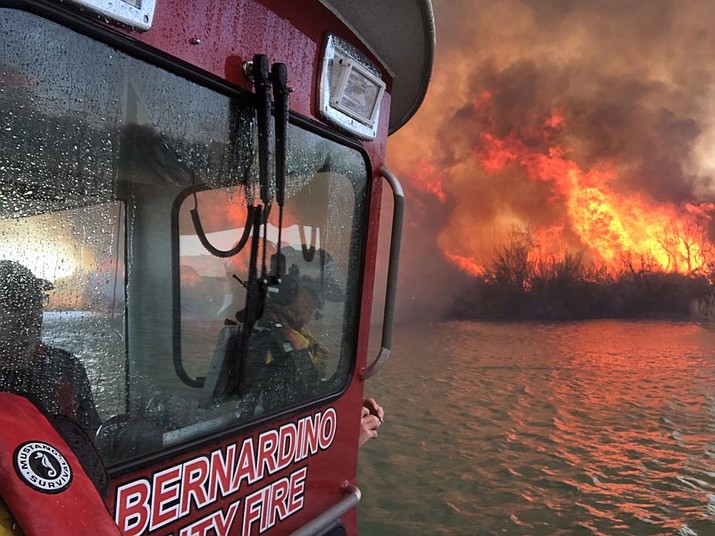 State Route 95 has reopened to traffic after a fire near Body Beach forced it to close for about five hours on Sunday.

A spokesman for The Arizona Department of Forestry and Fire Management said the agency sent two hand crews and some air support to help fight the fire.

A spokesman for the BLM said the agency has moved its equipment from Partners Point as a precaution, and BLM officials are providing assistance as needed.

Throughout the afternoon, onlookers lined up along Lake Havasu Avenue and Jamaica Boulevard, and near the Aquatic Center, to watch the fire. Witnesses said the fire had three separate “pops” as it moved southward, but it was contained near the water safety center at Contact Point.

Cody Delgado, a Lake Havasu native working for the Yucca Fire Department, was in the area during the fires. He said the fire's distinct smell could be attributed to the salt cedars in the burn area.” Delgado said firefighters from the Desert Hills Fire Department were also on scene.

The fire has burned about 60 acres, and Lake Havasu City Mayor Cal Sheehy says fire officials estimate about 100 acres will have burned when the fire is finally contained.

There have been no injuries or structural damage, he said. Fire crews have all the food and water they need, he said.

Mohave County Sgt. Kyler Cox said the water safety center at Contact Point was evacuated as a precaution, which meant relocating employees and patrol equipment to another location.

Sheehy said winds have caused the fire to jump and spread, but fire crews have the blaze under control.

"The salt cedars are burning hot and causing lots of smoke," Sheehy said. "It looks shocking, but crews are confident."

Sheehy said the Arizona Department of Forestry and Fire Management is the lead agency on the fire.