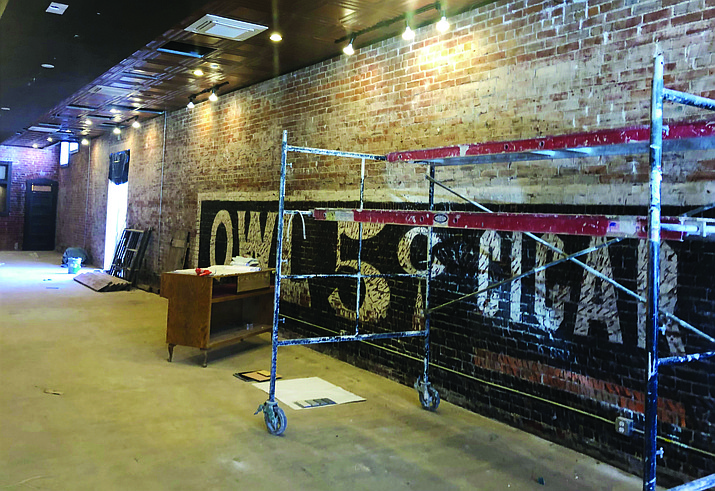 The storefront space next to the Holiday Courtyard on Whiskey Row is being reworked to serve as new indoor space to accompany the popular outdoor venue. The original brick walls will be retained in the space that will serve as a street-level reception area for the Grand Highland Hotel, as well as a ballroom/conference area and casual Holiday Hub room. (Cindy Barks/Courier)

Nancy Hinson, co-owner of the Holiday Courtyard and adjoining Grand Highland Hotel at 154 S. Montezuma St., said renovation work is underway on the street-level space that previously served as the Ortega’s Traders shop.

After Ortega’s opted not to renew its lease, Hinson said the building owners decided to convert the brick-lined space into a street-level hotel reception area for the Grand Highland, as well as a ballroom/conference space, and a casual “Holiday Hub” room. 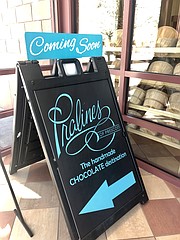 Popular downtown chocolate shop Pralines of Prescott is expanding into the old Wildflower Bread Company space at the Prescott Gateway Mall. Owners say the new shop, which will serve as the business’s main production space, is scheduled to open the week of April 1. (Cindy Barks/Courier)

The new features are expected to be done by late May/early June.

The outdoor courtyard, which is popular for weddings and other community events, will now offer the option of an accompanying indoor space, including dressing rooms — a common request of brides, Hinson said.

Within the week, fans of longtime downtown favorite Pralines of Prescott will be able to get their local chocolate fix at the Prescott Gateway Mall.

Sean Babb, co-owner of Pralines of Prescott, said the business will add a new site, as of the week of April 1.

Renovation work is currently underway at the old Wildflower Bread Company’s space at the Prescott Gateway Mall to accommodate a second location and main production site for Pralines of Prescott.

Babb says the business will maintain its downtown location at the Old Capitol Market, 120 W. Gurley St. as well, as it adds the larger site at the mall, 3250 Gateway Boulevard, Suite 424.

Although work might not be 100 percent complete on April 1, Babb says Pralines of Prescott plans to open for business that week. Future plans include adding baked goods and table seating area in the old Wildflower venue.

Allini, a new shop at the Prescott Gateway Mall, features all-natural, locally made skin products, such as handcrafted artisan soaps and bath bombs. The new shop is one of a number of new businesses locating recently at the mall. (Cindy Barks/Courier)

A purveyor of all-natural skin products — many of which are locally-made — has joined the collection of new shopping options at the Prescott Gateway Mall.

Matthew Fish, leasing broker for the Prescott Gateway Mall, said new shops including Allini, Pralines of Prescott, and Foot Fetish are among a dozen or so new businesses that are either in the works at the mall or recently opened.