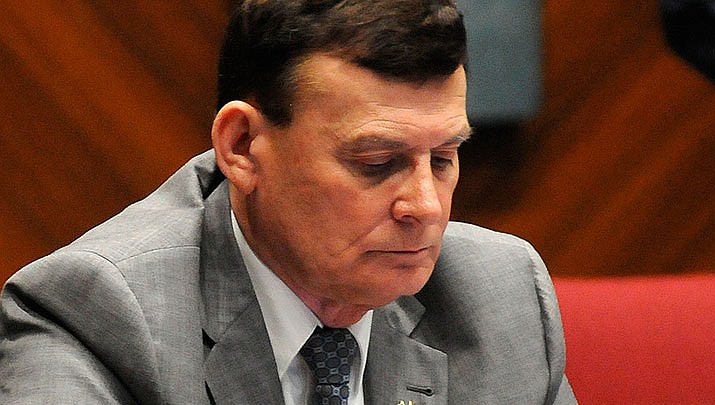 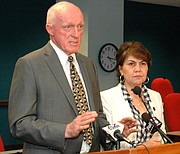 PHOENIX — Rep. David Stringer quit the Legislature Wednesday after House Speaker Rusty Bowers revealed to him he had the report of the legislator's 1983 arrest in Maryland for allegedly having sex with two boys, one age 13 and the other listed as a child younger than 15 who was developmentally disabled.

And now Bowers and House Minority Leader Charlene Fernandez are weighing whether there should be background checks -- and even fingerprinting -- of current and future lawmakers.

The Prescott Republican was set to go to court that afternoon in a bid to block the Ethics Committee from demanding that he turn over documents from the District of Columbia Bar Association which had looked into the arrest on multiple sex allegations, including one listed as "perverted practice.'' The Bar organization also reviewed a 1984 court decision to place Stringer on probation for five years and require him to seek admission to Sex and Gender Clinic at Johns Hopkins Hospital.

But that was before a private investigator hired by the House Ethics Committee which is looking into the incident got the report -- Bowers says legally -- from the Baltimore Police Department.

"Upon reading the report I was sickened,'' Bowers said.

The speaker said he informed Stringer Wednesday afternoon, about an hour before the hearing, that he had the police report.

"I asked for his resignation and that he would fill it out immediately, and informed him it would be best if he left the property, also immediately, which he did,'' Bowers said.

The 1983 police report detailed incidents starting a year earlier where Stringer, who would have been 35 or 36 at the time, walked up to the boy and a friend at a park "and asked if they wanted to go to his house and have sex.'' That resulted in a trip to Stringer's apartment where the sex acts allegedly occurred.

One of the boys, according to the report, is developmentally disabled.

"After this the boys were given $10 apiece and they left,'' the report states.

It also says that the boy had been back "at least 10 additional times,'' the last incident occurring in July 1983.

The private investigator who came up with the police report also reported that one of the victims -- it does not say which one -- went on to become a sex offender himself, "which is often the case with victims of sexual abuse.''

A follow-up report in January 1984 confirmed information that already had been published: That Stringer was placed on supervised probation and directed to seek admission to the clinic.

She also told Capitol Media Services that Stringer was never actually convicted of any crime, agreeing to probation ahead of any court judgment.

Bowers acknowledged the incident occurred decades ago. And he said he has no corroborated reports of any incidents involving Stringer since then.

But the speaker said he stands by his decision to ask Stringer to leave -- and immediately.

"I am aware, having grandchildren and children, and all of you in the public with our families and loved ones, that this is very disturbing, and especially to us with the trust,'' he said. "And I want to maintain that trust and the integrity of this institution.''

Bowers said it goes beyond that. 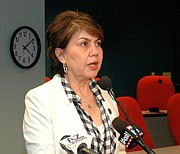 "We need to put together some new protocols and how we do business here and maybe look at what kind of people run for office,'' she said.

"We worry about people's financials when they get ready to run for office,'' Fernandez continued. "I think we need to start looking into people's backgrounds.''

Pushed as to what she has in mind, Fernandez said that, at the very least, a politician's supporters should be looking into "who you are and where you came from.'' And that, she said, includes whether there is any sort of criminal record.

"Maybe we need to be fingerprinted,'' she said.

"I'm open to those discussions, what do we need to do to assure that we can move forward and people can have confidence, as much as it's possible in a political arena, in the membership of this House,'' he said.

Bowers declined to say what Stringer told him when the speaker asked for his resignation and whether the Prescott Republican said he was innocent.

Stringer did not return messages seeking comment. But Chenal said there is less to the whole incident than the police report would suggest.

She read from what she said was part of the findings by the D.C. Bar which reviewed what happened in its own investigation to determine whether to strip Stringer of his ability to practice law.

"In the facts and circumstances of this case, there was no involvement of moral turpitude such as would adversely affect your fitness to practice law,'' Chenal read from the letter. That same letter, she said, noted that there was no actual conviction, with the trial court "entering probation before judgment'' and agreeing to expunge the records after the probation period.

But Chenal said it's even more basic than that.

"I do know that if he had really done something with the boys, he would have been convicted,'' she said. "He would have gone to prison.''

None of that convinced Bowers, calling the record showing Stringer being placed on probation "scandalous.''

"How this could happen is beyond my imagination, how a justice system could fail in this way,'' he said, quickly adding, ''in my view.''

There is nothing in the police report to show whether prosecutors were able to get the cooperation of either victim.

The documents released Friday by the Ethics Committee also reveal that the Yavapai County Bar Association refused to renew Stringer's membership in December following published reports of racially charged remarks and comments about the burdens of immigration, particularly from non-European countries, people who "don't melt in, they don't blend in, they always look different.''

"Your recent comments in public regarding race, diversity, and the burdens of minorities on Arizona do not comport with this high level of dignity and respect we expect from our members or other Arizona attorneys,'' wrote Brian Shaw, president of the association. "These comments fail to promote public trust in our membership and our profession in general.''

Stringer, in a confidential letter to Shaw that the Ethics Committee obtained, said his comments were taken out of context, resulting "in an incomplete and distorted version of what I actually said.'' More to the point, Stringer defended them.

"My comments, read in context and in full were offered with civility and good faith and reflect intellectual honesty and respect for the truth,'' he wrote. "Everything I have said is factually accurate and can be supported by academic research and the public record.''

He also accused the association of "imposing a politically correct speech code.''

Chenal said the decision by the lawyer group was "very, very political'' but declined to provide other details.