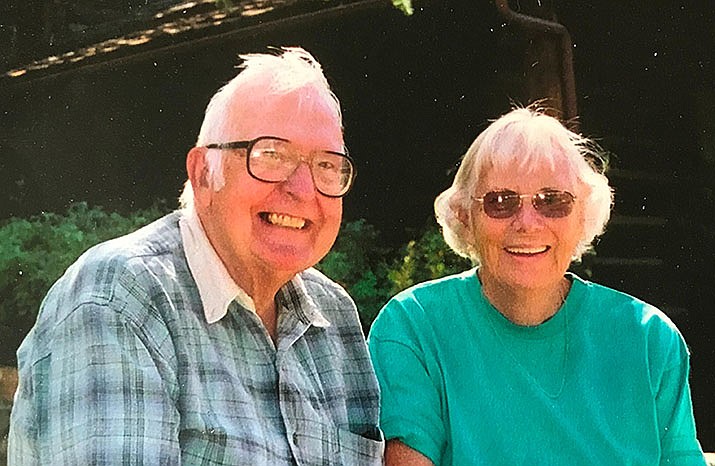 Leslie Christine Wenzel passed on October 1, 2018, at her recent home in Mesa, Arizona.

Leslie Christine Wenzel passed on October 1, 2018, at her recent home in Mesa, Arizona. She had lived the prior 27 years with her loving and devoted husband, Joseph Herman Wenzel, in Prescott, Arizona, until he passed away June 7, 2017.

Leslie was born March 23, 1929, to Edgar and Florence Sutherland in The Bronx, New York. Joe was born at home, August 28, 1929, to Herman and Marguerite Wenzel, in The Bronx, New York. Joe’s father was a skilled cabinetmaker who built pianos for Steinway. Joe told stories of the Hindenburg passing over The Bronx on its way to disaster, and remembered seeing the swastikas on its fins. Joe worked primarily in construction and the building trade before serving in the U.S. Army from 1951 to 1953. He married Leslie Christine Sutherland on January 23, 1954, honeymooning in New Orleans. Joe and Leslie moved to Berkeley, California, where Joe obtained his Bachelor’s degree in Electrical Engineering at the University of California — Berkeley. Leslie continued to paint and create her beautiful macramé while working on her PHT (Putting Hubby Through) degree. The summer before he started at UCB, Joe and Leslie worked as firefighters for the US Forest Service in North Fork, Idaho.

Upon graduation, in 1957, Joe and Leslie moved first to Boulder, Colorado, then Ithaca, New York, where Joe earned his master’s degree in Electrical Engineering from Cornell University. Joe worked for General Electric in both Ithaca and Syracuse, New York. Joe continued his education and earned his PhD in Computer Science at Syracuse University. Joe retired as a Statistical Analyst for Niagara Mohawk Power Corporation. Leslie now a mother of four, worked as an Assistant Teacher in the Syracuse School District for over 20 years. She also volunteered with the Girl Scouts teaching “Craft Skill” badges like sewing, knitting, crochet, and macramé. As a skilled seamstress Leslie made colorful matching dresses for herself and her two girls. Joe and Leslie were avid folk dancers.

Joe and Leslie retired in 1990 and moved to Prescott, Arizona, where they traveled and enjoyed life. Since their move to Prescott, Leslie was active with the DAR (Daughters of the American Revolution) and Joe perused training in Paralegal Studies and wrote several articles on Native American Legal issues. In addition, he studied environmental law and was very active in the Sierra Club.