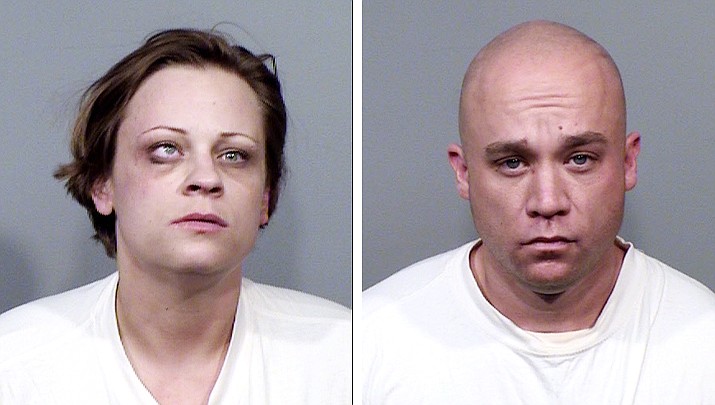 Renee Cassie Hall, left, and Andrew Busch, were arrested in Cordes Lakes on Sunday, March 24, after both were found with a variety of drugs, forged driver’s licenses and blank credit cards. (YCSO/Courtesy)

A Chino Valley woman and a Williams man were arrested in Cordes Lakes on Sunday, March 24, after both were found with a variety of drugs, forged driver’s licenses and blank credit cards.

Around 9 p.m. that night, deputies with the Yavapai County Sheriff’s Office (YCSO) were dispatched to the McDonald’s in Cordes Junction to investigate a report of a woman offering drugs in exchange for a ride to Prescott Valley.

When deputies arrived and spotted the woman described in the call, she attempted to walk away from them, but was eventually detained, the YCSO reported. At first, she gave deputies a fake name. Her true identity, Cassie Hall, 36, from Chino Valley, was later confirmed.

During a discussion about the reason for the call, Hall told deputies she was concerned about her friend’s medical issue. The friend was seated in a nearby car, so deputies checked on him and reported him “ok.” He was identified as Andrew Busch, 31, from Williams. A witness confirmed with deputies that Hall had offered ecstasy in exchange for a ride.

Hall was carrying a backpack at the time and had tried to place the pack in the vehicle with Busch when deputies initially spoke to her, the YCSO reported. Thinking the pack likely contained contraband, deputies requested permission to search it and Hall refused. She continued to provide a false name and birthdate while claiming she was from Texas.

“Due to her refusal to provide a true name during a lawful detention, Hall was arrested and her backpack searched as part of the pending booking inventory,” YCSO spokesperson Dwight D’Evelyn said.

Inside the pack, deputies found marijuana, a glass meth pipe, a gram of meth and several pills, which Hall admitted were ecstasy, the YCSO reported. Once her true name was discovered, two local warrants were verified.

Speaking with Busch, deputies requested permission to search his vehicle. He refused, so an Arizona Department of Public Safety K9 was requested, deployed, and alerted on the vehicle. Checking for the source of the odor, deputies found about one ounce of meth and several small ‘bindle’ baggies indicating drug sales, the YCSO reported. Deputies also located what appeared to be GHB, or gamma-hydroxybutyrate. This liquid has become best known in media as a “date-rape” drug, D’Evelyn said.

Deputies also discovered paper used to make forged credit cards, five forged driver’s licenses with pictures of Busch on three of them under different names, and 20 blank credit cards with magnetic strips. Also found were a Master Card in the process of being completed; 21 cards with Busch’s name embossed on them; a ledger containing 15 names and addresses of individuals; a card scanner allowing transfer of data to the forged cards; a computer and embossing equipment.

“It was readily apparent that Busch was involved in a credit card forgery scheme,” D’Evelyn said.

Both Hall and Busch remain in the Yavapai County jail in Camp Verde on $25,000 bonds.

The credit card forgery aspect of the case remains under investigation as deputies are working leads regarding victim identification and areas in Arizona where Busch used the forged cards and identifications.