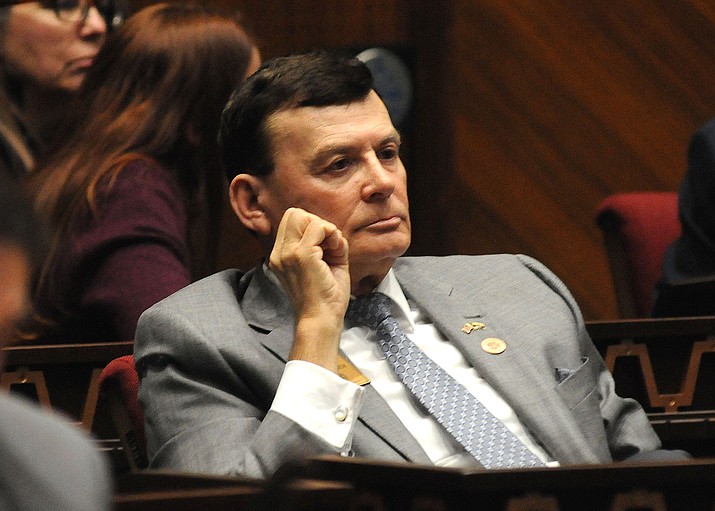 Rep. David Stringer, R-Prescott, at the Arizona House of Representatives on Jan. 28, 2019, in Phoenix. Stringer resigned Wednesday in the face of a probe by the House Ethics Committee. (Howard Fischer/Capitol Media Services, file)

PHOENIX — Embattled state Rep. David Stringer resigned late Wednesday in the face of a probe by the House Ethics Committee into charges of making racially charged comments and a recently disclosed 1983 arrest on charges including child pornography.

The move came as the Prescott Republican sought and then withdrew a legal bid to quash the subpoenas issued by the committee to produce documents. The panel also wanted Stringer to submit to an interview with committee investigators this coming Friday.

Multiple phone calls by the Courier were not returned by Stringer on Wednesday night.

Stringer submitted a one-sentence letter saying he was quitting effective at 4 p.m. Wednesday, just an hour before the deadline given by the Ethics Committee to produce the documents. But Rep. Reginald Bolding, D-Laveen, who filed one of the two complaints against Stringer, suggested some conclusions might be drawn from the timing.

“The evidence that he was trying to withhold from the Ethics Committee must be damning since he chose to quit rather than comply with a subpoena,’’ Bolding said.

In response to the news of the resignation late Wednesday, Prescott Mayor Pro Tem Billie Orr said, “I believe it’s the right decision for our city, LD1 (Legislative District 1), and the state. I am thankful this has happened.”

Orr was vocal in December 2018 in the Prescott City Council’s call for Stringer’s resignation, calling his earlier racially disparaging comments “horrific.” At the time, she said she hoped Stringer would resign.

The Prescott City Council later passed a resolution condemning Stringer’s comments and calling for his resignation.

Since the start of the controversy, Orr said, “We’ve not really had the representation we need at the legislature. He hasn’t been around, and you want to be able to feel you can go to your representative.”

Prescott Mayor Greg Mengarelli, who called for the special Dec. 4, 2018, Prescott City Council meeting to consider the council action against Stringer, could not be reached for comment late Wednesday.

It also means the panel will not release a formal report on what it has found, a report that Rep. T.J. Shope, who chairs the Ethics Committee, said could be ready as early as this coming week. But House GOP spokesman Matt Specht did say the committee will release public documents it gathered during the investigation “as soon as possible.’’

Stringer’s resignation also follows an ill-fated attempt by Carmen Chenal, Stringer’s attorney, to have Shope removed as chairman of the Ethics Committee. That came after Stringer came across comments made by Shope last year, after videos surfaced of him making comments about race and immigration, saying he didn’t believe Stringer belonged in the Legislature.

Bowers, in a prepared statement, said he found any claim that Shope is biased “to be completely without merit.’’

“I have the utmost confidence in Rep. Shope’s ability to fairly investigate the complaints against Rep. Stringer,’’ the statement read. Shope also made the comments before he was chair of the Ethics Committee. And he also said at the time that he doubted the full Legislature would eject Stringer based solely on those comments.

Stringer’s decision to resign at the exact hour of the scheduled court hearing comes amid legal questions about whether Maricopa County Superior Court Judge Rosa Mroz actually would have granted his petition to have the subpoena for documents quashed. Stringer also had asked Mroz to issue an injunction barring the House from ejecting him for failing to comply with the demand.

That was likely an uphill battle, as courts in general are loath to interfere with how the Legislature, a separate branch of government, conducts its internal business.

Wednesday’s unexpected action sets the stage for Republican precinct committeemen in Yavapai County to nominate three people to replace Stringer, with the county board of supervisors making the final pick.

It also means that a recall being organized by Chris Hanlon, a Cave Creek Democrat, becomes legally moot. Hanlon had filed the necessary papers to form a political organization but was taking a wait-and-see approach to what the Ethics Committee and full House eventually decided.

But what it also means is that, with the Ethics Committee canceling its probe, there is unlikely to be any public disclosure of exactly what happened in Maryland. What is known is that court record obtained by New Times showed an arrest on multiple charges. But Chenal said the child pornography charge was dismissed due to lack of evidence. As to the others, there was some sort of court proceeding where Stringer was placed on probation for five years, required to perform some community service, and ordered to seek treatment at a clinic for sexual disorders.

After the period of probation the conviction was expunged and the records were sealed.

Chenal told Capitol Media Services that what the court eventually found was not really serious, pointing out that the District of Columbia Bar Association, which licensed Stringer to practice law there, reviewed the records and concluded there was “no moral turpitude.’’

But Chenal declined to release the entire two-paragraph findings from the D.C. Bar to the Ethics Committee, saying those records were produced under a promise of confidentiality. She conceded, though, that the material contained some findings that “could be misconstrued’’ and might be politically damaging to her client.

Rep. Kelly Townsend, R-Mesa, who filed the Ethics Committee charge associated with that incident, said it was important for lawmakers to know what actually happened.

The other charge against Stringer began with statements he made last year to a meeting of the Republican Men’s Club.

Among those comments were that immigration represents “an existential threat to the United States,’’ that America’s “melting pot’’ exists for “people of European descent,’’ and that immigrants from south of the border don’t assimilate because they maintain connections with their home countries.

Stringer, than a first-term lawmakers, told Capitol Media Services at the time he was simply informing his audience that they need to recognize changes are occurring in the United States because of immigration.

Despite call for him to resign, including from Gov. Doug Ducey, Stringer won reelection.

But a month later, Stringer was taped making comments to Arizona State University students saying that African-Americans “don’t blend in’’ because, unlike immigrants of European descent, they “always look different.’’

That led Rep. Reginald Bolding, D-Laveen, to seek an immediate vote in January to expel Stringer. When that failed, Bolding filed his own Ethics Committee complaint, saying that Stringer’s conduct “undermines the public’s confidence in this institution and violates the order and decorum necessary to complete the people’s work in this state.’’

There was no immediate response from Senate President Karen Fann and Rep. Noel Campbell who represented the same legislative district.

In January, after the reports of the Maryland arrest were publicized, Fann told Capitol Media Services she did not believe he could be an effective representative for the area.

Campbell had weighed in last year following the remarks at the Men’s Club, which he also attended, saying that Stringer’s comments were, at the very least, “inartful.’’

But he also said it would be wrong to paint Stringer as a racist. And he lashed out at other who he believes rush to “vilify’’ him and seek his political scalp.

Bolding was pleased by the resignation.

“It’s a good day for Arizona,’’ he said, as it is for the people who were offended by the lawmaker’s comments. But he questioned why it took Stringer months to reach the conclusion that resignation was the best option.