Moore: Spring birding down in the valley 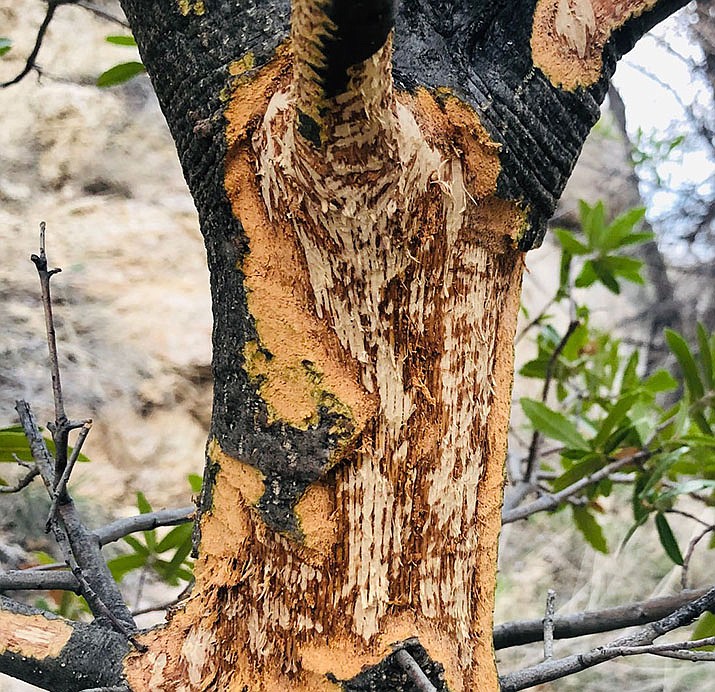 Porcupine damage to the trunk of a scrub oak tree on the backside of Willow Lake dam. (Eric Moore/Courtesy)

I was in Phoenix this past week and managed to squeeze in a few hours of birding—first along the Salt River, and later at Gilbert Water Ranch.  It was a lovely day.  It didn’t get above 70 degrees all day.

The drive down provided early evidence that we should have a great spring bloom in a few weeks.  There are areas where the desert floor is already carpeted with small yellow flowers.

I spent close to two hours at the Nina Mason Pulliam Rio Salado Audubon Center located on Central Avenue and the Salt River.  I have visited this location on many occasions, but I have never seen the river running as high as it was on this particular day.  It was over 100 yards wide!

The depth and speed of the water has certainly impacted the birds that normally use the river to forage for food. Most of the year, the river is very shallow—more like a small stream—making it attractive to wading birds like herons and egrets.  However, there weren’t a lot of birds at the river this past week due to the muddy, churning waters.

From the Audubon Nature Center, you can access a system of trails that run east and west on both sides of the Salt River.  On the south side, east of the Audubon center, there is an area with many man-made burrowing owl habitats.  Burrowing owls have been negatively affected by habitat loss down in the valley, and have been relocated to protected areas along the Salt River.

Later in the day, I spent another two hours birding at the Riparian Preserve at Gilbert Water Ranch.  This high-use urban park is very busy with a lot of foot traffic, but the birds don’t seem to mind.  I think the birds have acclimated to the presence of a lot people walking the trails all day every day.  This makes it easier to see the birds, as they allow you to approach them fairly closely rather than flying away.

There were still a lot of wintering birds at the Water Ranch, including long-billed dowitchers, least sandpipers, American avocets, and black-necked stilts.  We also saw all three teal species—green-winged, cinnamon, and blue-winged!  This is a great time to do some bird watching in the metro-Phoenix area, before it gets too hot.

This past week, I enjoyed a hike to the back side of Willow Lake dam.  It was great to witness water flowing over the spillway and back into Willow Creek.  I was surprised by and impressed with the volume of water flowing out of Willow Lake.  While on the hike, I observed porcupine damage to the trunks of several oak trees growing near the creek.

In case you are wondering if the pair of great horned owls I wrote about a few weeks ago are still vocalizing and carrying on, the short answer is yes!   I usually hear them each evening and early each morning.  I have also seen the ravens and the Cooper’s hawk this past week, so it will be interesting to witness the ‘pecking’ order between these three species.  I doubt it will be a peaceful co-existence, but perhaps more of a restrained tolerance toward one another.

This evening, Thursday, March 28th 2019, at 7:00 p.m., is the Prescott Audubon Society’s monthly meeting at Trinity Presbyterian Church located at 630 Park Avenue.  Tonight’s program is on the “Ecology of Amazonian woodcreepers” in Brazil, and will be presented by Prescott resident Micah Riegner.  The meeting is free and open to the public—I hope you can make it.

Eric Moore is the owner of Jay’s Bird Barn, with two locations in northern Arizona – Prescott and Flagstaff.  Eric has been an avid birder for over 50 years. If you have questions about wild birds that you would like discussed in future articles, email him at eric@jaysbirdbarn.com.