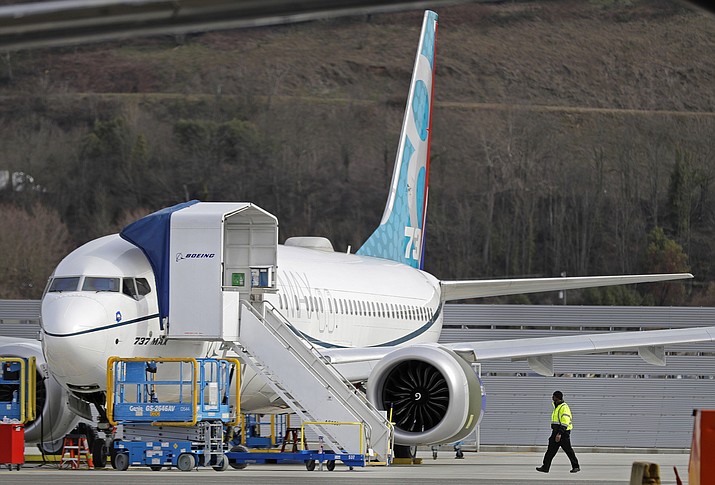 This Thursday, March 14, 2019, file photo shows a Boeing 737 Max 8 airplane parked at Boeing Field in Seattle. America's standing as the model for aviation-safety regulation will be on trial as congressional hearings begin Wednesday, March 27, 2019, into the Federal Aviation Administration's oversight of Boeing before and after two deadly crashes of its best-selling airliner. (Ted S. Warren/AP, File)

The Federal Aviation Administration plans to revamp oversight of airplane development after the two deadly crashes of Boeing's new 737 Max raised questions of whether the FAA has gone too far in letting companies regulate themselves, according to testimony prepared for a Capitol Hill hearing on Wednesday.

For decades, the FAA has delegated some authority for certifying new aircraft to the manufacturers, reducing government costs and, defenders say, speeding the rollout of new models.

But in the wake of the air disasters in Ethiopia and Indonesia over less than five months, that practice has been seized on as evidence of an overly cozy relationship between the FAA and the industry.

The self-certifying practice, called Organization Designation Authorization, was expected to come under scrutiny Wednesday at a Senate subcommittee hearing where the acting FAA administrator, Transportation Department inspector general and chairman of the National Transportation Safety Board were scheduled to appear.

In testimony prepared for the hearing, Inspector General Calvin Scovel III said the FAA plans to significantly revamp its oversight of aircraft development by July. He gave few details but said the changes would include new ways to evaluate training and self-audits by aerospace companies.

Over the years, the inspector general's office has found management weaknesses in the agency's oversight, Scovel said in testimony obtained by The Associated Press.

Transportation Secretary Elaine Chao, who oversees the FAA, has asked Scovel to look into the way the agency certified the 737 Max as airworthy. The Max, featuring bigger, more efficient engines and new automated anti-stall system, went into service in 2017.

"We know that our oversight approach needs to evolve to ensure that the FAA remains the global leader in achieving aviation safety," he said.

Elwell also said Boeing submitted an application on Jan. 21 spelling out changes it planned to make to crucial flight-control software on the 737 Max — the system suspected of playing a role in the Oct. 29 crash of a Lion Air jet in Indonesia and the March 10 plunge of an Ethiopian Airlines Max. In all, 346 people died.

FAA engineers and pilots have tested the update in a simulator and the plane, according to his prepared remarks. "The FAA's ongoing review of this software installation and training is an agency priority," Elwell said.

An FAA spokesman said Wednesday that the Boeing submission was an "initial application" and that the agency had not yet received Boeing's completed plan for updating the software.

The Transportation Department watchdog has previously raised questions about the FAA's certification of Boeing planes and the seemingly close relationship between some agency managers and Boeing.

The inspector general also plans to examine the widespread use of automated systems to fly airplanes and look into whether the FAA is making sure airlines are adequately training pilots to handle situations when such features fail.

Multiple investigations into the 737 Max crashes are focusing on thenew automated system that can push the plane's nose down to prevent an aerodynamic stall.