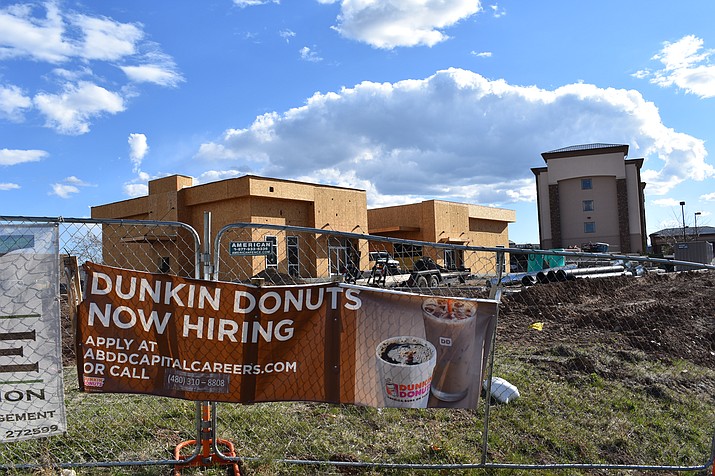 Construction of the buildings in Prescott Valley that will house a Dunkin’ Donuts, Baskin Robbins and Mod Pizza is ongoing. (Richard Haddad/WNI)

Dunkin’ Donuts fans will have to wait a couple extra months before biting into their first doughy morsel at the chain restaurant’s upcoming location in Prescott Valley.

During the project’s groundbreaking in mid-November, the optimistic estimation for completion was March or April.

As is often the case with ground-up projects, however, delays in construction occurred due to consistent inclement weather throughout the winter.

“Any time there’s a rain day, it backs up the completion date for construction,” said Paul Faust, vice president of the Dunkin’ Donuts franchise group heading the project.

The monster snowstorm that hit the area in February was especially surprising to Faust and his team.

Adding up all of those delays has pushed the estimated opening date to late June, he said.

Located on the corner of Glassford Hill Road and Centre Court, the commercial project’s design includes two buildings with a fireplace feature in between. One of the buildings will house Dunkin’ Donuts and Baskin Robbins, and the other will host a Mod Pizza outlet, which specializes in design-your-own individual pies.

“It will be more of an inviting setting that you don’t normally see for a Dunkin’ Donuts and Baskin Robins,” Faust said.

Dunkin’ Donuts has just begun the hiring process for the new location, hoping to first find a manager for the store.

“As we get closer, we’ll start hiring for shift leaders and crew,” Faust said.