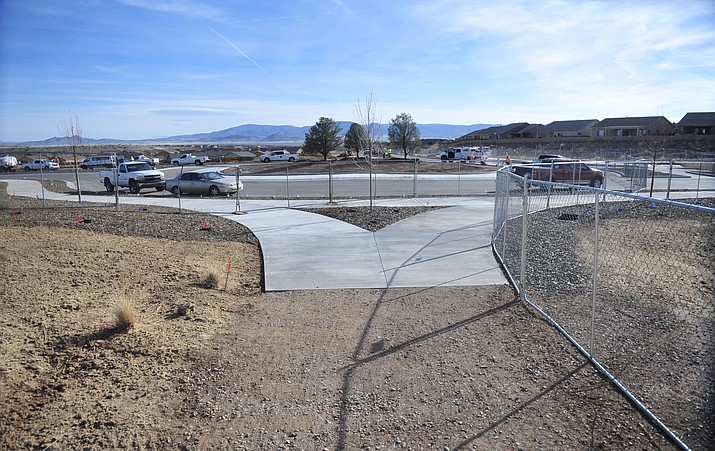 With open space versus development at the heart of Arizona Eco Development’s (AED) plans for The Homestead and Point of Rocks subdivisions and possible annexation into the City of Prescott, the Town of Prescott Valley has a stake in one portion of the project – the Iron King Trail.

The town owns the Iron King Trail, having purchased it from the Atchinson, Topeka and the Santa Fe Railway abandoned right-of-way in 2003 for $10. The 4.2-mile-long trail starts at Glassford Hill Road and Santa Fee Loop in the Granville subdivision and ends at the connection with the Peavine Trail at Entro Junction.

The trail is between 60 feet and 100 feet wide and runs from inside Prescott Valley’s boundary west into Yavapai County. Prescott Valley will continue to own the trail even if the City of Prescott annexes AED property.

Five roadways cross the Iron King Trail, said Prescott Valley Town Manager Larry Tarkowski. The crossings are at Glassford Hill Road and Santa Fe Loop; a paved portion of the trail in the Granville subdivision at Tuscany; Granville Fairway; Jasper Drive; and a yet-to-be-named crossing in the Jasper development farther west in the later stages of development.

Members of the public who want to know about proposed trail crossings must keep their eyes open for planning and zoning commission and council meeting agenda items from developers in whose jurisdiction is developing either side of the trail, Tarkowski said.

All of these crossings were approved by the Town Council during the subdivision approval process after they received approval by the Planning and Zoning Commission, Tarkowski said.

“The crossing shall be within the general area as depicted and the exact location will be fixed and memorialized at final plat,” the encroachment permit document states.

PV Public Works Director Norm Davis and Jason Gisi of AED, both signed the document Dec. 20. It was recorded with Yavapai County Feb. 7.

Tarkowski said the issue of this crossing would be something that goes before the City of Prescott or before the Yavapai County Planning and Zoning Commission and the Board of Supervisors. “Right now, the area that the encroachment permit is for is on both sides of the Iron King Trail in Yavapai County. It does not have Prescott Valley on either side of it. The permit is needed because we own the trail,” he said.

If the City of Prescott annexes that particular area, and the developer asks would they be able to cross the trail, Tarkowski said the answer is yes.

The Prescott Valley Planning and Zoning Commission reviewed and recommended the Jasper Master Plan in April 2014 for 3,587 units on 1,245 acres. In March 2018, the Town Council approved Phase 1 for 362 lots. Phase 2, situated north of Phase 1, consists of 290 lots on 128 acres west of the current Granville subdivision.

Prescott resident Joe Zarnoch said he and others were unaware of AED’s request for permit, and he feels members of the public were denied an opportunity to comment.

He added that granting the easement has eliminated any discussion of other possibilities for a roadway such as an underpass, or if, in fact, this crossing is necessary.

Tarkowski said there has been no public opposition to crossings of the trail. “If that development is proposed in the City of Prescott, there will be all kinds of opportunity to object to a road connecting the development on the north and south side at that point,” he said.

“If the City of Prescott came to us and said, ‘OK, we have this land that has been annexed and we want a road,’ what kind of basis can we deny that when we have approved five already?”