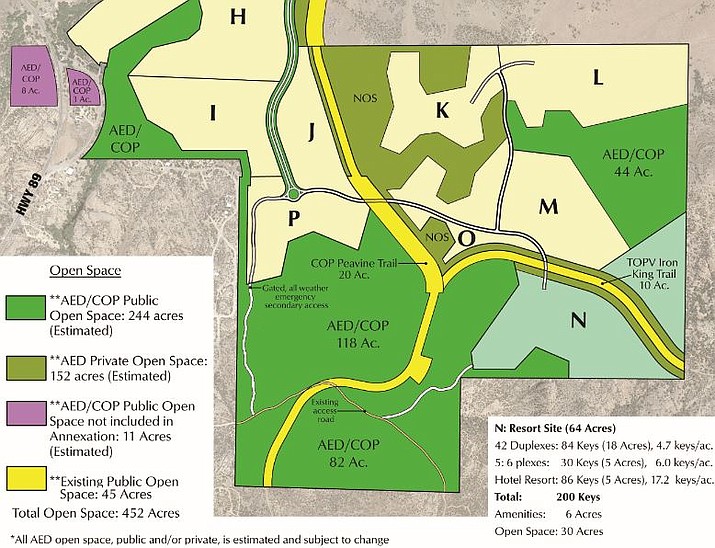 The iconic cluster of granite at the Point of Rocks and about 255 acres of nearby land would be preserved and dedicated to the City of Prescott under a new master plan map submitted by developers on Monday, March 25.

City officials call that concession by Arizona Eco Development a “tremendous” move forward, and they say it brings them back to the table in negotiations with the developer. 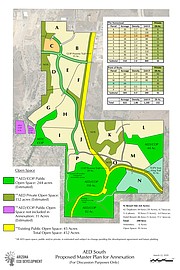 “We’re still not there, but this shows substantial progress,” said City Manager Michael Lamar, who reported in mid-February that the city had called off negotiations with the developers because of a divergence of opinion about the amount of open space being preserved.

Mayor Greg Mengarelli added, “I think we’re back at the table. This is a good map, and we can renew our negotiations. I see this as a guaranteed minimum (of open space). It saves the real critical rocks.”

Still, the proposed open-space acreage falls far short of the 500 acres of open space that the local citizen group Save the Dells is pushing for.

Bonnie McMinn, chair of Save the Dells, said Monday afternoon that she had yet to see the developer’s new proposal. But of the proposed preservation of Point of Rocks, she said, “It’s a start, certainly, but the devil’s in the details.”

Developer Jason Gisi delivered a map and six-page letter to the City of Prescott Monday morning, revising the annexation and development proposal that he had initially submitted in late 2018.

The information pertains to the long-discussed Homestead annexation into Prescott city limits that Arizona Eco Development is requesting for 866 acres of the former Granite Dells Ranch in the center of the Granite Dells.

Among the major changes in the revised submittal is the preservation of a 200-acre chunk of land around the Point of Rocks on both sides of the historic Peavine Trail, as well as a 44-acre parcel north of the Iron King Trail, and an 11-acre parcel east of the Peavine.

To accomplish preservation of the Point of Rocks area, Gisi said he is proposing a relocation to the north of the 300 or so homes that were originally planned to be built there.

In exchange for the preservation, developers are seeking the promise of city water and sewer services for the relocated homes, which would be slated for land that is owned by Arizona Eco east of its northern annexation proposal. The property would be outside of the annexation area and would remain in unincorporated Yavapai County.

Over the past year or so, the Save the Dells group has pushed the developer to preserve a 500-acre regional park at the Point of Rocks and along the nearby Peavine and Iron King trails.

McMinn pointed out that the Point of Rocks is only one of the important features within Save the Dells’ proposed 500-acre park. The No-Name Creek to the north and the wildlife corridors in the area are also crucial, she said.

“AED’s revised plan is an insult to the efforts that our community has made over the past year,” Trudeau stated in an email. “The Point of Rocks will be isolated from the rest of the Dells by a new road and an expanded resort proposal. And their plan shows total disregard for wildlife, flood risk, and scenery from the Iron King Trail. I’m deeply disappointed.”

Save the Dells’ position is scheduled to be discussed by the Prescott City Council at 3 p.m. Tuesday, March 26, at Prescott City Hall, 201 S. Cortez St., with a possible vote.

In Gisi’s letter, he emphasizes that the Point of Rocks has been privately owned for more than 100 years, and he calls Save the Dells’ position “overreaching.”

“AED does not envision any overall equitable annexation agreement wherein AED’s private 500 acres demanded by Save the Dells is donated to (City of Prescott) for public use,” states Gisi’s letter.

In all, the developer is proposing a total of 1,160 homes (see related map), as well as a 200-unit resort located along the Iron King Trail.

Tuesday’s discussion will not include a vote on Arizona Eco’s annexation proposal. That is likely still months away, say city officials.