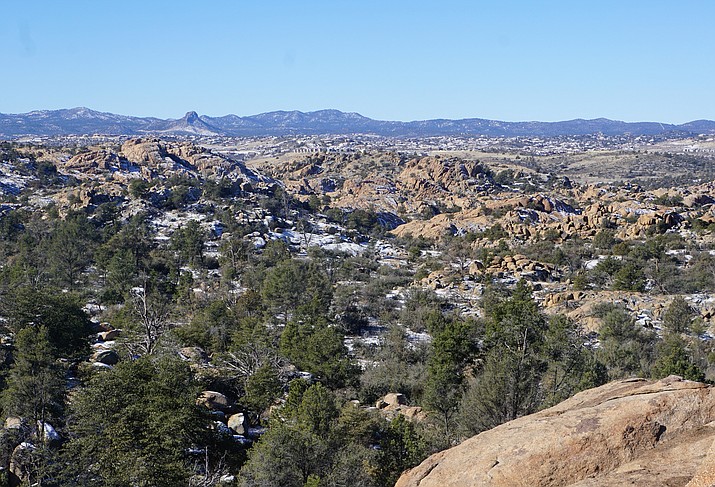 Prescott’s Granite Dells area encompasses a vast patchwork of public and private lands. Over the years, the City of Prescott has bought and preserved the Dells-area Watson and Willow lakes, as well as about 424 acres of Dells open space, including a 160-acre tract of the Storm Ranch, pictured here. (Cindy Barks/Courier)

In the big picture of Prescott’s Granite Dells, nearly 1,900 acres of prime land has already been preserved at and around Watson and Willow lakes.

That includes iconic parcels such as the lakes themselves, the creekside terrain of the Flume Trail, the scenic boulders of the Constellation Trail, and the rolling sea of granite of the Storm Ranch North.

Prescott officials are stressing the past purchases this week as the City Council prepares to take on a contentious matter — whether to endorse the “Save the Dells” group’s position that 500 acres more of Dells land should be preserved from pending development.

“The important thing we’re trying to demonstrate is there has been a continuous effort to acquire this land,” Prescott Community Outreach Manager John Heiney said. “A lot of these things have been going on for 20-plus years.”

Heiney and Recreation Services Director Joe Baynes note that while much of the recent attention has focused on the prominent Point of Rocks, there are plenty of other Dells parcels that have either been purchased and preserved, or are possible acquisitions in the future.

A compilation of the city’s past Granite Dells purchases begins with the 1998 purchase of Willow and Watson lakes from the Chino Valley Irrigation District.

That $15 million purchase was the result of a voter-approved bond issue, which Prescott property owners paid off over the next 15 years through property taxes.

Also in 1998, the city acquired the 108-acre linear parcel that makes up the Peavine Trail — the old railroad line of the Santa Fe, Prescott & Phoenix Railway that passes through the Granite Dells on the eastern side of Watson Lake. 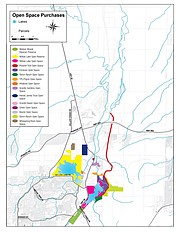 Then, in 2000, voters again approved a preservation-related tax, when they agreed to extend the duration of the city’s existing 1 percent street sales tax and add in open space acquisitions.

That set off a series of Granite Dells and other purchases, such as: the 27-acre Payne/Trust for Public Lands parcel, which became the site of the Flume Trail along Granite Creek; the 80-acre Harold James parcel that now contains the Constellation Trails on the west side of Highway 89; and the 2018 purchase of 160 acres of Storm Ranch land, which now is crisscrossed with a network of Storm Trails.

In all, the city reports that about 1,893 acres of land have been preserved in the Granite Dells area. Along with the $15 million lakes purchase, the city has spent about $13.4 million for Dells-area open space over the past 18 years.

‘HEART OF THE DELLS’

While members of “Save the Dells” acknowledge that the city has made progress, they say the 500 acres at and around the Point of Rocks is a vital component to any Dells preservation effort.

“‘The heart of the Dells’ is not just a tagline for us,” said Joe Trudeau, past chairman of Save the Dells, referring to the group’s slogan. “The Point of Rocks is the most spectacular area; it’s an absolute essential addition (to preservation efforts).”

And while Trudeau said the group “recognizes that the city made efforts in the past to preserve open space,” he says that has been largely at the insistence of open-space supporters.

“We hear this a lot — ‘look at what we’ve done,’” Trudeau said. “But it’s really because of the incredible legacy of citizen advocacy groups.”

Trudeau and McMinn also point out that the city’s total expenditures for open space have fallen far short of the amount that officials promised in the lead-up to the 2000 sales tax election.

Initially, the city had talked about using up to $40.7 million of the total sales tax revenue for open space purchases, but city councils over the years opted to allocate the bulk to street improvements. A judge’s ruling in the early 2000s upheld that direction.

Trudeau maintains that revenues from the 2000 sales tax were intended to be split half and half between streets and open space. If that had happened, he said, the city would have had ample money to buy the 500 acres of Point of Rocks-area land.