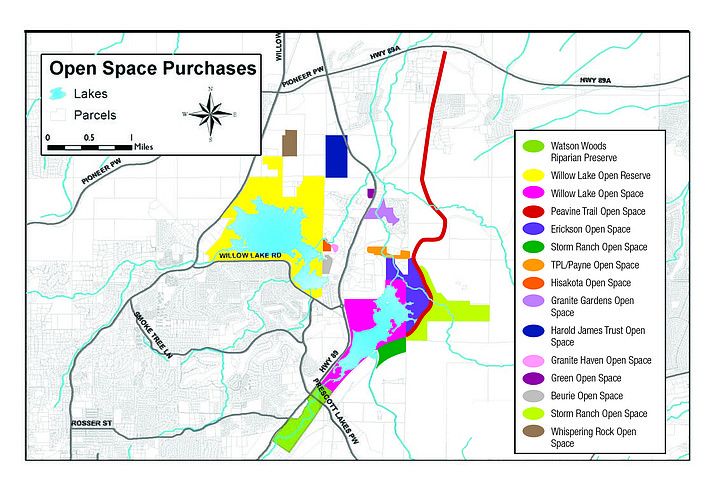 Along with the patchwork of city-owned parcels in Prescott’s Granite Dells is an even greater amount of privately owned land.

The Dells area has long been a popular spot for ranches and homes. Today, numerous subdivisions and individual homes take up large tracts of the scenic area.

The recent focus on the Dells stems from a proposal by developer Arizona Eco Development to seek annexation into city limits for two parcels of mostly vacant Dells-area land north and south of the Highway 89A/Granite Dells Parkway interchange.

While the city is awaiting a revised annexation application from Arizona Eco, previous submissions have shown plans for hundreds of homes and a resort on the 866-acre southern portion that is concentrated around the iconic Point of Rocks granite formation.

Jason Gisi of Arizona Eco said Thursday, March 21, that he is still working on the details of the revised application. The preliminary work includes “being careful to follow requirements of Proposition 400,” he said, referring to the voter-approved measure that governs large-scale annexations into Prescott city limits.

Meanwhile, Gisi maintains that it would be premature for the City Council to endorse the Save the Dells proposal that is up for a possible vote during the council’s 3 p.m. March 26 meeting.

“It’s real simple for me – I don’t see how the council can entertain a decision on a piece of business they haven’t considered yet,” Gisi said.

As of Thursday, Gisi said he hopes to submit his revised application as soon as possible, but he was uncertain when that would be.

Gisi has said his revised proposal would preserve about 250 acres of contiguous acreage at an around the Point of Rocks granite formation.

The Save the Dells group is pushing for preservation of a 500-acre regional park that would take in the Point of Rocks area and the wooded valley along No-Name Creek to the north.