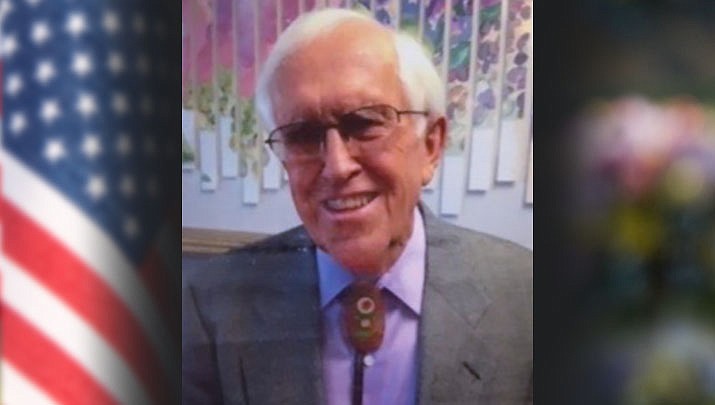 Death leaves a heartache no one can heal. Love leaves a memory no one can steal. And so it is as our father, James Dwain (J.D.) Conley, stepped through the gates of heaven on the beautiful, sunny morning of March 15, 2019. He came into this world 95 years ago on Oct. 23, 1923, on his parents’ farm near Pukwana, South Dakota.

He spent his childhood years on that farm with his parents (Jim and Isabel) and his three sisters, Dorothy, Altas and Sandra. This was where so many of his stories would come from that began to shape him into the man we came to know. He attended grade school 3.5 miles from the farm, where in the mornings he’d ride ahead on his Shetland pony (and best friend) Dickie to get the fire started and break the ice on the drinking water pail before his sister, Dorothy, who was also his teacher, arrived. It wasn’t until his freshman year (1938) that he moved “into town” — Kimball.

He said he remembered being told you either took up singing, played basketball or joined football. He was too small for football and his music teacher quickly told him, “He’d better take up basketball.” He was known as “Two Point” because that was what he usually scored in a game! His true sport was track, and his best event was the quarter mile. At one of the meets, he won five medals — which he turned into a necklace for his girlfriend and future wife of 67 years, Bettie Jane Johnson. They met their sophomore year.

J.D. graduated from Kimball High School in 1941. His first “real” job was part-time for JC Penney located in Chamberlain, South Dakota — a whopping 25 cents an hour. Not too long into the job his boss arranged an interview for a full-time job at a bank that would pay $60 a month! He remembered working at that bank on Pearl Harbor Day.

In early 1942, a friend convinced Duane (as his friends called him) not only to ride along with him for his new job in Seattle, but got him to stay and take a job at the Seattle Port of Embarkation as a clerk typist — working for $120 a month! His girlfriend, Bettie Jane, was working in Washington, D.C., as a clerk typist for the FBI. They arranged for her to move across country to work at his same office.

J.D. was to report to duty with the Army on March 27, 1943, but Bettie Jane decided they would be married before he left for Fort Lawton. With a lot of finagling on his part, they were married in Seattle on March 5, at midnight in front of a Justice of the Peace. The Army was opening a new training camp in New Orleans, and J.D. was to be a company clerk for the First Company of the Transportation Corps — pretty high tech for that day AND he was able to live off base!

Bettie Jane joined him in May. They were able to be remarried in the Catholic Church. Sometime later, they had their first of four children, Melanie, while he was still in the service. Discharged from the Army in 1946, the three of them moved back to Kimball. J.D. began civilian life and his sales career selling life insurance. His wife, “Jane,” wasn’t crazy about the amount of driving the job entailed, and when a dairy came up for sale, they borrowed money from her parents and started Conley Dairy with 22 cows. Not fun at all! They knew there had to be something else they could do to make a better living rather than hauling hay, milking cows by hand in an old, cold, wet barn twice a day, seven days a week, and delivering milk with their daughter, Melanie, riding along side!

It was 1948 that Stanley Home Products “found” Jane. She realized after holding a few Stanley parties and seeing the money that could be made, that this would be the way they could make that better living! With two children (Michael being born in 1950, seven years after Melanie) and two jobs something had to give! J.D. hauled the cows to the Kimball sale barn to be sold by the pound and put a for sale sign up for the dairy. Upon sale they paid Jane’s parents back and went into selling Stanley products full time. Together they built one of the leading sales units in the United States. The once very shy J.D. was promoted in 1951 to be a Branch Manager in Bismarck, North Dakota, and Jane to Unit Manager.

Keeping the momentum going, becoming experts in sales, they were promoted. Leaving the good ‘ol USA behind, they were transferred to Calgary, Alberta, Canada. Moving there in 1954, J.D. became the Area Sales Manager for Western Canada and Jane a Branch Manager. In September 1957, their third child, Marilyn, was born seven years after Mike. They made the move to Vancouver in 1959 to continue their careers with Stanley. In November 1960, Mark, the youngest was born (three years after Marilyn). They decided all the success was not worth living outside the good ol’ USA. They took a demotion and made the move to Phoenix, Arizona, in 1962. After almost two years there, and not loving the summers, they left Melanie behind to marry her husband, Bob Nuttall. J.D. and Jane took the next opening available in Stanley, which landed them in Waterloo, Iowa, where they continued their sales life with Stanley until 1972.

It was during a Christmas vacation to Phoenix that J.D. learned about Prescott... at of all places and times while using the restroom in a Sears and overhearing a conversation between two men about this wonderful town. After a visit to Prescott, they fell in love with the area. In the back of their minds they had always dreamed of owning a motel.

Leaving their son, Mike, (who was in Vietnam) to marry his wife, Debby Jordan, they moved to Prescott in July 1972. They made a complete change in their sales career and bought the Buena Vista Motel on East Gurley Street. Realty of owning a motel set in, it wasn’t as they expected. They were constantly sending people staying at the motel to Realtors, being the go-between. They knew they should become a bigger part of that contact. Having all the tools for sales, they decided to sell again, but this time it would be real estate!

J.D. was first to get his license (1974). Beginning with Barrett Realtors, J.D. convinced his wife to get hers as well. The two of them were to take a job with the largest firm at the time, Pauley and McDonald — J.D. not joining unless they hired his wife (who became the first woman to work as a Realtor for that firm)! Combining real estate sales and motel hosting, they finally sold the motel in 1976. Soon after, they decided to create their own company. And, why not! A-Action Realty was born in 1977 to be located across the street from the Buena Vista Motel in the old Halford’s Cafe next to the Apache Lodge. Business was booming, with expanding offices in Chino and Prescott Valley. J.D. is responsible for bringing the slogan “Everybody’s Hometown” to Prescott — which is still used today! They thoroughly enjoyed the real estate sales world... selling hundreds of homes and making lifetime friends.

J.D. became extremely active in the community. He was a member of the Chamber of Commerce and served on the Board of Adjustments. He hated the way the service organizations’ signs looked as people came into town, so “beautifying” them as they are seen today became another of his achievements. The organization that became most near and dear to his heart was the Noon Lions Club, becoming a member over 40 years ago and was still a member upon his death. His most recent business card identifiable with the Lions logo states, “Past Most Everything,” as he was president at least twice and held various other positions within the club. The Newspaper Drive and Annual Pancake Breakfast will forever be a part of his being.

After living in four beautiful homes and growing in years, they moved into Las Fuentes Senior Resort Village in 2004. Living the life of retirement and making even more friends, Jane’s health began to decline. She left this world in 2010. But life and love was not over for J.D. He met a wonderful Prescott native who also lived at Las Fuentes... it was the night of the Spring Fling when “his Pal,” Marty Allan, came into his life and became a part of his family. He was lucky enough to love and have been loved twice. Marty took great care of him and loved him thoroughly up until he left this earth.

His wife, Bettie Jane, and granddaughter Ragen, along with his parents and two of his sisters, welcomed him home on that beautiful March morning.