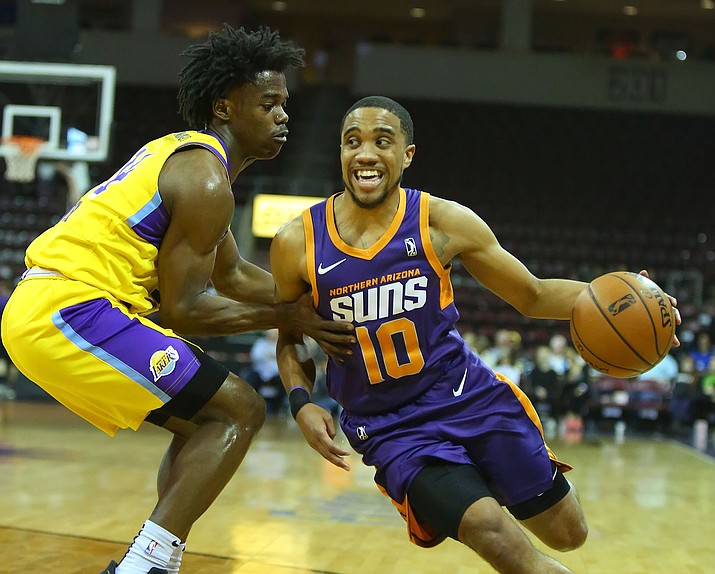 PRESCOTT VALLEY — Ask any Suns fan, and they will tell you there aren’t many things sweeter than beating the Lakers.

Well, the Northern Arizona Suns did that Saturday night to wrap up their 2018-19 season, taking down the South Bay Lakers 99-96 at the Findlay Toyota Center.

It was a thrilling finish at the NAZ Suns’ Salute to Heroes Night in front of 2,151 fans.

“That was a fun game,” head coach Bret Burchard said. “Our guys played hard and everyone contributed. We needed everyone to contribute; we lost a lot of our bodies along the way. It’s fun, it’s fun to finish that way, with such high energy and a great crowd, everyone was into it. It was a good way to end on a high note.”

The Suns (12-38) finished the year with a defensive stand, forcing a missed Travis Wear 3-pointer as time expired.

Up one with less than a minute left, Aaron Epps made a short jumper to put the Suns up by three points. South Bay’s Andre Ingram answered with a driving layup with 3.5 seconds left. Peter Jok made a pair of free throws on the ensuing possession, before Wear missed the shot at the buzzer.

Epps achieved his 10th double-double of the season with 23 points on 9-of-14 shooting, including 5-of-7 from distance, and 10 rebounds. He passed Johnny O’Bryant (nine, 2016-17) for the second most double-doubles by a Suns player in one season in team history. Jok recorded a career-high 14 rebounds to go with 20 points (four 3-point makes) and five assists.

ShawnDre Jones made his second start of the year and recorded a career-high 14 assists and tied his career-high 13 points.

Hollis Thompson had his 10th 20+ point game of the season with 21 points on 7-of-12 shooting, five assists, three rebounds and two steals. Daxter Miles Jr. led the bench with 10 points to go with four rebounds and four assists, while Khadeem Lattin secured 10 rebounds, his most in a game with the Suns.

The Suns won the season-series 3-1 against the Lakers, dropping them to a 21-29 overall record. There were 14 lead changes and eight ties, and both teams held double-digit leads at one point in the game.

Justin Harper led South Bay with 20 points, to go with six rebounds. Only two other Lakers scored in double figures, as Ingram and Wear each had 19 points apiece.

The Suns hold the No. 1 overall pick in the 2019 NBA G League Draft, looking ahead to next year.