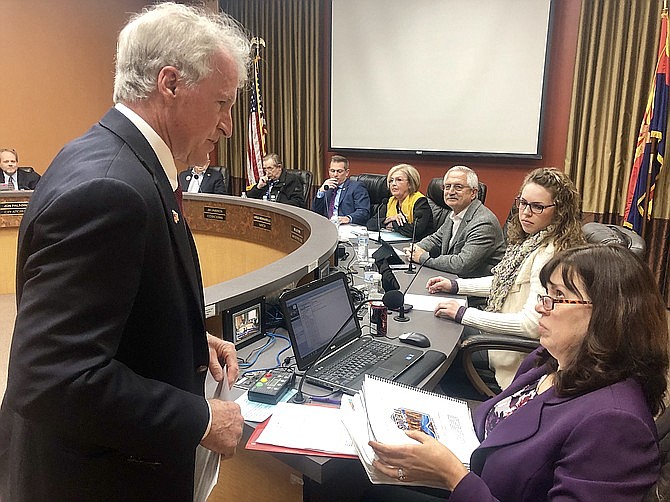 Thomas Rusing, a member of the Save the Dells advocacy group, submits a petition containing nearly 5,000 signatures to the Prescott City Council in February. The petition asks the city to support Save the Dells’ position for preserving 500 acres of open space in the proposed Arizona Eco Development project in the Granite Dells. That council decision is expected Tuesday, March 26. (Cindy Barks/Courier, file)

A Tuesday vote that is related to a pending new subdivision in Granite Dells — but not the actual approval of the project — is expected to draw a large crowd to Prescott City Hall, possibly numbering in the hundreds.

In a March 21 news release, the city states: “City staff are planning for a large turnout at the City Council meeting (at 3 p.m.) on March 26, and are taking steps to accommodate as many citizens as possible.”

The crowd is being anticipated because of the “Save the Dells” organization’s call for a “citizen’s assembly” at City Hall for the City Council’s consideration of a resolution relating to Arizona Eco Development’s pending plans for a new subdivision in the Granite Dells.

Prescott City Hall, 201 S. Cortez St., has a capacity of 150 people, and city officials say they will adhere to that legal limit.

For any overflow, the city is also making the Founder’s Suite at the Prescott Public Library available, where people can watch the meeting live on a large projector screen. The library is located at 215 E. Goodwin St. The meeting also can be viewed remotely from home.

The city is emphasizing that Tuesday’s vote is not the City Council’s final decision on the Arizona Eco Development project itself.

Rather, this week’s decision relates to a petition by the Save the Dells group asking the City Council to consider a resolution supporting its call for preservation of a 500-acre regional park around the Point of Rocks.

“The item on the agenda for Tuesday was brought forward by the Save the Dells group and is independent of Arizona Eco’s annexation application request,” City Manager Michael Lamar said. “In fact, the application must still go through several public meetings, including Planning and Zoning Commission review, before council consideration.”

Currently, the city is awaiting a revised annexation application from Arizona Eco Development.

“In terms of a realistic time frame for council’s review of the application, we are months away,” Lamar said.

The city news release included a number of other important facts for the March 26 council meeting, including:

• Speakers will be allowed a maximum of two minutes per person, and anyone who wants to speak must complete a comment card, which will be available inside the council chambers.

• The city will not permit signs, banners or backpacks inside City Hall for safety reasons.

• A 1 p.m. City Council study session will precede the 3 p.m. voting session. “If people arrive before 3 p.m., we ask that they remain in the hallway until the voting meeting begins,” the city news release states. “If they choose to enter the study session, we ask that they are as quiet as possible so as not to disrupt the meeting.”

There are two large screens in the lobby. “We ask that viewers be aware that City Hall is open for regular business, and that they do not obstruct ingress and egress points,” the release stated.

For those who want to view the meeting remotely, options include:

• Watch live on Channel 64 or live streaming via Prescott Media Center at http://prescottmediacenter.org/.

• Go back to http://prescottmediacenter.org/ anytime to stream the meeting.

The meeting agenda is available at: www.Prescott-AZ.Gov.

‘Save the Dells’ petition position set for Prescott Council vote March 26
Prescott City Council rejects resolution from Save the Dells
Friday Catchall: Save the Dells a seat; is it ‘permanent’ or ‘voting’?
Privately owned tracts make up significant portions of Dells
City, developer differ on amount of open space at Point of Rocks
Event Calendar