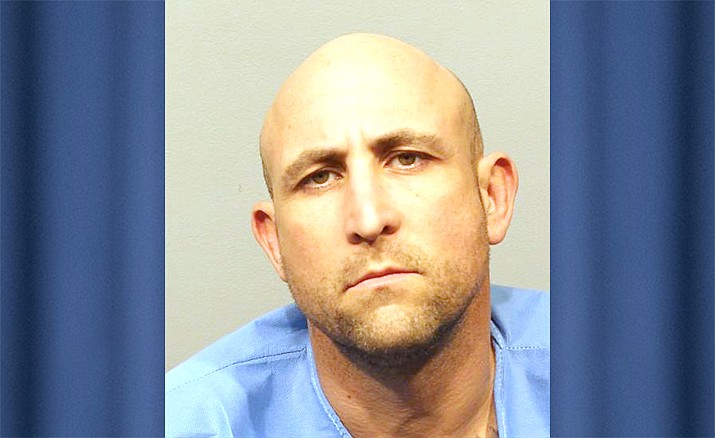 A Cordes Lakes man who was shot during an altercation on Thursday, March 21, was arrested on multiple charges once released from a local hospital Monday, March 25.

The man, Gregory Hardy, was shot by a woman who told police she was protecting her family when Hardy allegedly entered her Cordes Lakes home uninvited and began threatening her and her husband, according to the Yavapai County Sheriff’s Office (YCSO).

Hardy, 42, apparently knocked on the family’s front door and entered the house in the Conestoga Drive neighborhood at about 7:30 p.m., the YCSO reported.

As the female homeowner approached from the kitchen, Hardy demanded money from her, she told deputies.

“When she told him no, he grabbed her by both arms, and as she struggled with Hardy her husband came to her aid,” according to a YCSO news release.

The husband ordered Hardy to leave the house several times, but he refused and continued to be aggressive against the couple, the release said.

The couple’s grandchildren, ages 3, 5 and 12, were in the house and at one point tried to come into the living room but were told to stay away as the couple tried to get Hardy to leave.

The woman managed to leave the room and grab a handgun as her husband struggled with Hardy, the YCSO reported. When she returned, she told Hardy she had a gun and demanded he leave. Instead, Hardy moved toward her, she told deputies.

“In fear of her life and that of her husband, she fired a couple times, striking Hardy at least once in the lower body,” said the news release.

Even after he was wounded, Hardy did not immediately retreat. Eventually, though, he headed to a car waiting outside, according to the YCSO.

Sheriff’s deputies were contacted and found Hardy at a nearby home where he had collapsed.

Deputies and fire personnel treated him before transporting him to a hospital, the release said. The female homeowner suffered minor injuries when she was grabbed by Hardy during the initial attack.

When detectives spoke to Hardy at the hospital, he claimed one of the victims owed him money, which the victim denied, YCSO spokesperson Dwight D’Evelyn said.

“[The] suspect may have had a prior association with another family member who was not present during the incident,” D’Evelyn said.

Once released from the hospital, Hardy was booked into the Yavapai County jail in Camp Verde on charges including robbery, criminal trespassing, disorderly conduct and burglary.He remains in custody with a $50,000 bond.