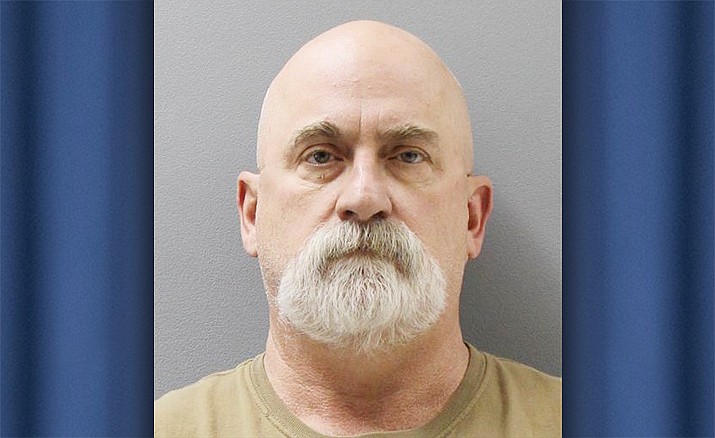 Gene Sherman, 56, from Paulden was arrested on March 11 after police found pornographic images of children on his personal electronic devices and illegal weapons in his home.

A Paulden man has been arrested after a police investigation revealed there were 10 pornographic images of children on his personal electronic devices and a number of illegal weapons in his home, including a fully-automatic rifle.

In mid-February, the Yavapai County Sheriff’s Office (YCSO) received a tip from the National Center for Missing Exploited Children that images of child pornography had been downloaded onto an electronic device, according to a YCSO news release. At least two of the images were reviewed by YCSO officials, who described them as depicting preadolescent females – some appearing as young 8 years old – in sexual positions.

Detectives issued a subpoena for the account connected with the downloads and learned it was associated with Gene Sherman, 56, from Paulden, according to the news release. Detectives eventually sought and obtained a search warrant for Sherman’s home in Paulden, which was served on March 11.

Sherman was spoken to and he admitted downloading the images already viewed by detectives and acknowledged the likelihood of similar images on other electronic devices in his home, according to the news release.

During a search of the home, deputies located a fully automatic rifle, along with numerous handguns and suppressors/silencers.

Sherman was arrested and charged for possession of child pornography and weapons misconduct offenses regarding the suppressors and fully automatic rifle.

The following day, detectives used the authority of the search warrant to conduct forensic downloads on Sherman’s electronic devices. Ten pornographic images of children were found on the devices, which were accessible only to Sherman by his admission, according to the news release. All of the images portrayed females under the age of 15 in sexual poses/situations, some with adult participation.

After Sherman’s booking on March 11 on the initial charges, he was also charged with the 10 images of child pornography. He remains in-custody on a $500,000 bond.

Experts have found that when pornographic images of children are spread online, the victims depicted “often suffer a lifetime of re-victimization by knowing the images of their sexual abuse are on the internet forever,” according to the United States Department of Justice.