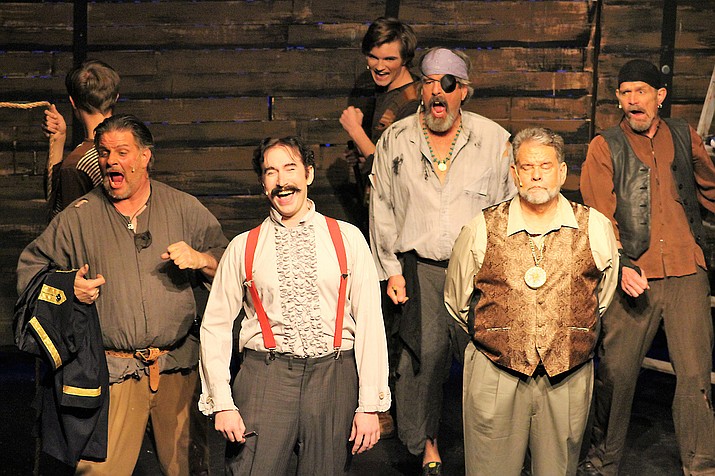 Prescott Center for the Arts’ “Peter and the Starcatcher”, a prequel to “Peter Pan”, is running through Sunday, March 31. (Susan Lanning/Courtesy)

There’s still time to see the “Peter Pan” prequel, “Peter and the Starcatcher” on the Prescott Center for the Arts main stage.

A clever show that is about 6 years old, director Bruce Lanning said it tells of how Peter Pan meets the Lost Boys, includes a girl by the name of Molly who is the future mother of Wendy, and a Captain Hook who has yet to lose his hand.

“This is a story of how he lost his hand,” Lanning said.

The show is based off of the book “Peter and the Starcatchers,” written by humorist Dave Barry and adventure author Ridley Pearson; it opened at Prescott Center for the Arts last weekend. Opening weekend went really well, Lanning said.

The production’s songs are reminiscent of Gilbert and Sullivan and heavy with sound effects, Lanning said. He also said he enjoys the writing, he said, mentioning natives on an island whose language is influenced by Italians and everything in their chants has to do with Italian food, Lanning said.

Molly, played by Lily Grubert, is really the main character of the show, and much of the plot revolves around women’s positions in the world, he said.

“It’s (1885) and it’s a long time after pirates had stopped existing on the sea,” Lanning said. “They make a point of that, that this guy, Black Stache, he’s holding on.”

Black Stache is played by Will Larson.

The show has some really good actors alongside some actors who have not acted for very long. Gruber is 15 years old and has quite a bit of flexibility, Lanning said. She can do almost anything in the future, he said.

For more information about “Peter and the Starcatcher,” visit www.pca-az.net.

At a Glance: PCA puts on ‘Peter and the Starcatcher’
PCA show all about love from different angles
KornuKopia Calendar: March 8-17
'A 1940s Radio Carol' takes stage at Prescott Center for the Arts
Review: ‘Boeing, Boeing’ fast-paced, funny