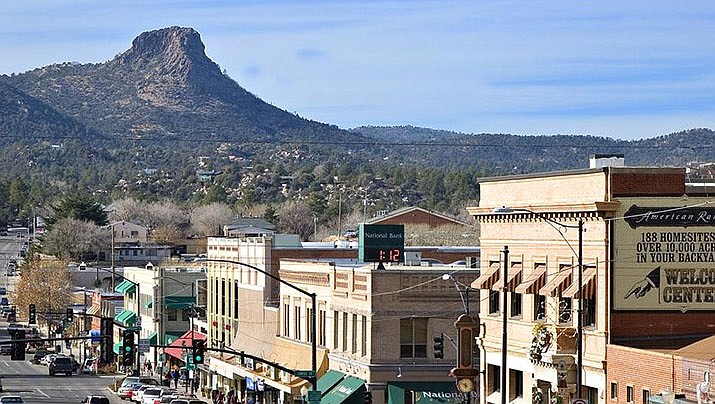 Prescott's slogan of "Everybody's Hometown" has a lot to do with a mine that was proposed for near Thumb Butte, according to a Prescott resident. (Courier file)

• EVERYBODY’S HOMETOWN — Elisabeth Ruffner may not be happy about this, or at a minimum controversies live on.

This past Sunday, my tribute column to Mrs. Ruffner’s life and passing told of her proclivity toward history. She knew it all.

Well, according to Jeri Smith-Fornara of Prescott, the “Everybody’s Hometown” slogan for Prescott “originated with Citizens for Protection of the Prescott Area, which was fighting a proposed open-pit copper mine near Thumb Butte. It would have been the largest in the Southwest.

“I personally copyrighted the slogan in the 1970s, and it subsequently was trademarked. We won our fight against the copper mine and, also, to keep Prescott National Forest alive.”

Interestingly, Smith-Fornara adds that Mrs. Ruffner “promoted the mine, as did her husband.”

Ruffner’s reference to me was about an Arizona Highways column extolling the virtues of Prescott.

Maybe she was remembering only part of the history — or she was focused on columns the day she contacted me. It is entirely possible Smith-Fornara and Mrs. Ruffner are both correct.

The controversy lives on.

• TAXES — While you work to file your tax returns by April 15 (a bill in the Legislature setting state returns to June 15 has not yet passed the House), consider the Internal Revenue Service’s list of common scams:

Phishing: Taxpayers should be alert to potential fake emails or websites looking to steal personal information. The IRS will never initiate contact with taxpayers via email about a bill or tax refund.

Identity theft: Taxpayers should be alert to tactics aimed at stealing their identities, not just during the tax filing season, but all year long.

Return preparer fraud: Be on the lookout for unscrupulous return preparers. Some dishonest preparers operate each filing season to scam clients and perpetuate refund fraud.

Inflated refund claims: Tax preparers who ask clients to sign a blank return, promise a big refund before looking at taxpayer records or charge fees based on a percentage of the refund are probably up to no good.

Fake charities: Be wary of charities with names similar to familiar or nationally-known organizations.

Be careful — the IRS is watching too! Visit www.irs.gov/newsroom/dirty-dozen for more information.

• LADDERS? — I don’t like bugs. But, apparently, ladders are more of a concern.

More than one-half million Americans will get hurt in ladder accidents, and March is National Ladder Safety Month. As folks gear up for spring cleaning, safety pros warn of major ladder dangers.

Consider that 97 percent of falls occur at home or on a farm, and approximately 300 ladder falls are fatal, according to the Centers for Disease Control and Prevention (CDC).

If your spring cleaning includes window or gutter cleaning (I can think of a lot more tasks that require a ladder — but you get the idea), inspect your ladder, use it only on stable surfaces, adhere to warning labels, and — when in doubt — hire a professional!

I guess the only thing that would be worse is a bug, with me, on a ladder. Sigh.

Watch the Courier for our Spring Home Improvement special section for more tips, and DOs and DON’Ts.

• PICK OF THE WEEK — (Proving there’s always something good to do in the Prescott area that’s cheap or free): The annual Prescott Regional SciTechFest at Embry-Riddle Aeronautical University from 10 a.m. to 4 p.m. Saturday, March 23.

Editor's Note - This column has been updated to correct that the bill to extend state tax returns to June 15 has not yet passed the House.

IRS warns against these two scams
Everything you need to know about taking care of this year's taxes
IRS: ‘numerous’ tax scams try to separate people from their money
IRS advice: Avoid rush over Presidents Day holiday
IRS provides tips for last-minute filers