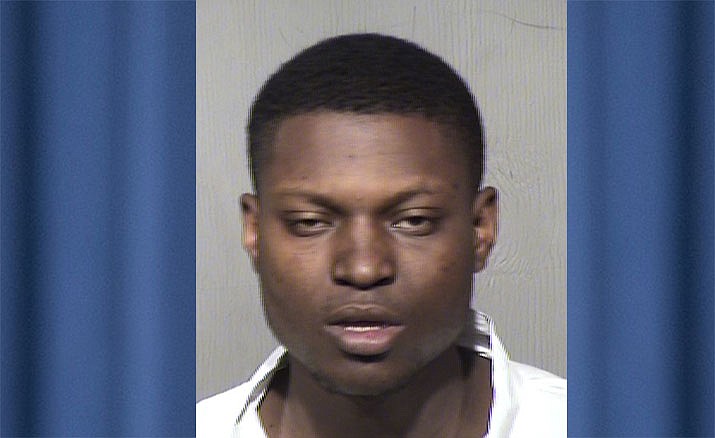 This Tuesday, March 19, 2019, photo provided by the Maricopa County Sheriff's Office shows Jeffrey Craig Rhone II. Phoenix police say Rhone, arrested in a shooting in which two people were killed and four others were wounded, reportedly was angry about his wallet being stolen while he was at the home where the shooting occurred. Police say Rhone II argued with several people at the home Monday, March 18, 2019, about his stolen wallet, left but then returned, and got into a fight with one person before being "physically removed" from the home. Police later spotted Rhone driving and arrested him without incident on Tuesday. (Maricopa County Sheriff's Office via AP)

PHOENIX — A man arrested in a shooting in which two people were killed and four others were wounded reportedly was angry about his wallet earlier being stolen at a home where officers found a bloody scene with victims both inside the home and on the ground outside, police said.

Police said in a probable-cause statement that witnesses said 29-year-old Jeffery Craig Rhone II of Glendale argued with several people at the home Monday evening about his stolen wallet, left but then returned and got into a fight with one person before being "physically removed" from the home.

"Witnesses stated that Jeffery was the primary aggressor at the beginning of the physical fight but had lost the fight," the statement said.

The shooting occurred several hours later at 3:30 a.m. after Rhone returned again early Tuesday, according to the statement.

Officers responding to a report of multiple people being shot found victims outside the home "with blood trails leading back inside" and at least one unresponsive victim inside, lying on the living room floor with an unharmed 6-month-old infant laying on the floor between her legs.

"A witness recalls hearing a knock at the door of the residence. A door of the residence was opened by an occupant and Jefffery entered the house with a gun and began shooting at the occupants of the house," the statement said, adding that a witness said it sounds like the shooter "was moving from room to room firing at subject as he walked through the house."

One victim told police he ran from the house, said he heard shots being fired and saw Rhone running after him and said he didn't stop running "until he realized he had been shot" and reached a hotel where he asked someone to call police, the statement said.

Police identified those killed as Jorge Rodriguez, 30, and Shelby Verderosa, 17.

The wounded victims were men ranging in age from 19 to 56, police said. Their names weren't released, and their injuries were described as serious but non-life threatening.

Police later spotted Rhone driving in his SUV about three hours after the incident, and he was arrested without incident, the statement said.

Bloody clothes were inside the vehicle that Rhone was driving, police said.

Investigators learned after the shooting that Rhone's roommate had reported to Glendale police that Rhone had returned to their apartment early Tuesday morning, before the shooting, and took the roommate's handgun while the roommate was asleep, the statement said.

Rhone remained jailed Wednesday on suspicion of two counts of homicide, four of aggravated assault and one each of disorderly conduct and burglary.