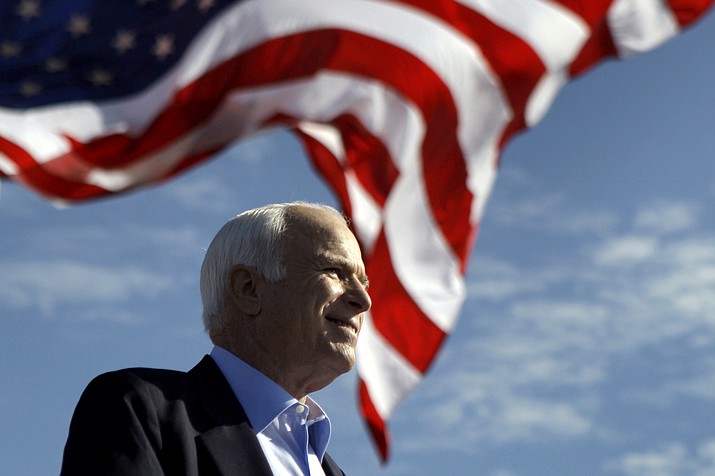 In this Nov. 3, 2008 file photo, Republican presidential candidate Sen. John McCain, R-Ariz. speaks at a rally outside Raymond James Stadium in Tampa, Fla. President Donald Trump is not backing down from his longstanding criticism of the late Sen. John McCain. Trump declared Tuesday at the White House: “I was never a fan of John McCain and I never will be.” Trump drew criticism over the weekend for tweeting insults at McCain, a Vietnam war hero, Arizona senator and 2008 Republican presidential candidate who died last year of brain cancer. (Carolyn Kaster/AP, file)

WASHINGTON — Key Republicans on Wednesday defended the late Sen. John McCain as a "hero" against ongoing attacks from President Donald Trump, daring to say what most in the GOP still won't seven months after the Arizona senator's death from brain cancer.

A trio of senators, from the most senior to the greenest freshman, defied Trump's apparently unprovoked declaration that he's "not a fan" of the decorated Vietnam War veteran because McCain cast the deciding vote against the Republican repeal of national health care. They took great care to describe McCain as a "hero," clear pushback against Trump's longtime assessment that McCain is not one because he had been captured in Vietnam.

Senate Majority Leader Mitch McConnell did not mention Trump directly, but said that he misses his friend McCain "today and every day." He deployed the H-word twice in one tweet.

"It was a blessing to serve alongside a rare patriot and genuine American hero in the Senate," the Kentucky Republican, who is up for re-election in 2020, tweeted. "His memory continues to remind me every day that our nation is sustained by the sacrifices of heroes."

McCain, a Navy pilot, was held as a prisoner of war and tortured for more than five years. Trump has never served in the military because he got a deferment for a bone spur in his foot.

"The McCain family deserves better, I don't care if he's president of United States, owns all the real estate in New York, or is building the greatest immigration system in the world," Isakson told The Bulwark, a conservative news and opinion website. Later, Isakson called Trump's remarks "deplorable."

"It will (be) deplorable seven months from now if he says it again," Isakson continued in remarks Wednesday on Georgia Public Broadcasting's Political Rewind radio show, "and I will continue to speak out."

"John McCain is an American hero and I am thankful for his life of service and legacy to our country and Arizona," she tweeted Wednesday. "Everyone should give him and his family the respect, admiration, and peace they deserve."

That McSally declined to criticize Trump directly reflects a broader wariness among Republicans to cross a president famous for holding a grudge and mobilizing his followers against GOP lawmakers he deems disloyal. Many Republicans have stayed silent this week, declining to join the GOP senators defending McCain and more broadly, America's millions of veterans.

But this week, Trump seemed to inspire a new determination among some Republicans to draw a line, however delicately.

"I can't understand why the President would, once again, disparage a man as exemplary as my friend John McCain: heroic, courageous, patriotic, honorable, self-effacing, self-sacrificing, empathetic, and driven by duty to family, country, and God," Romney wrote.

And Sen. Lindsey Graham, who wept openly on the Senate floor when McCain died but has allied himself with Trump, said Wednesday "there's no one I admire more than John McCain."

"I think the president's comments about Sen. McCain hurt him more than they hurt the legacy of Sen. McCain," he said, adding that, "A lot of people are coming to John's defense now... I don't like it when he says things about my friend John McCain."

Democrats, meanwhile, were eager to renew their praise for McCain.