PAL announces finalists for Leader of the Year awards 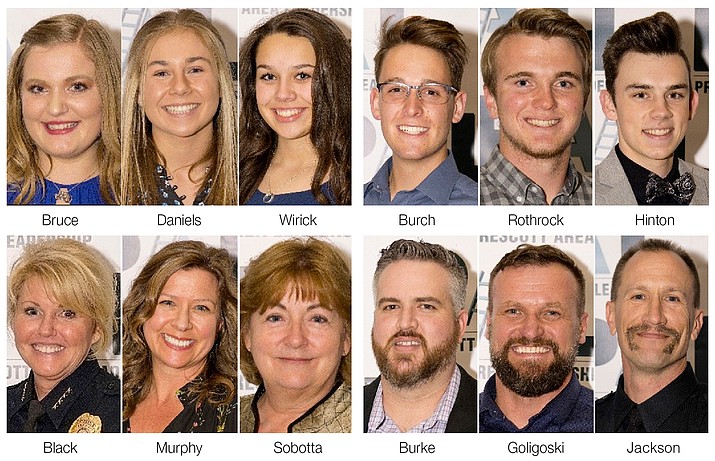 Prescott Area Leadership (PAL) has released the list of 12 finalists for its 2019 Leader of the Year Awards. While all have made impressive contributions to the community, only four will be chosen as Man, Woman, Male and Female Youth Leaders of the Year at the annual Awards Dinner and fundraiser. The event will take place at 5 p.m. Wednesday, April 10, at the Prescott Resort and Conference Center, 1500 E. Highway 69, Prescott.

PAL invites all community members to attend the awards dinner and celebrate these remarkable finalists.

Aydan Bruce is an officer of the National Honor Society and International Thespian Society. In 2018 she helped produce a show that raised $4,000 for a local charity. She is a lead soprano in the PHS Chamber Singers and Yavapai Youth Choirs, an alumni of the PAL Youth Leadership Academy, and serves with Granite Creek Hunger Ministries.

Addie Daniels has completed more than 1,000 hours of service with Lions Club, Yavapai County Education Foundation, Chino Valley Chamber of Commerce, Yavapai County Planning and Zoning, and children’s ministry. She is the editor of two “Since You Asked” volumes of veteran stories, led the Chino Valley Food Neighbors project and runs a bi-monthly emergency food pantry for homeless families.

Lauren Wirick served as captain of the varsity golf team and was recognized as All-State setter for volleyball in 2018, an award given to a player who demonstrates both outstanding skills and sportsmanship. As director of Young Life Capernaum, Lauren helped create a safe place where disabled youth could feel loved, make new friends and receive religious education.

Ashton Burch has been on student council since he was a freshman and has raised nearly $2,000 for his class through multiple fundraisers. He also led a Bowl for Kid’s Sake team that raised $1,000 dollars for Big Brothers Big Sisters. Ashton is currently working on a plan for his own summer smoothie business.

Jeremy Rothrock is an Eagle Scout and the Senior Patrol Leader of his Boy Scout troop. As his Eagle Project, Jeremy built a kiosk at Watson Lake Park, providing park visitors with information such as trail locations, fish species of the lake, fire restrictions and more. Jeremy also serves as his school’s cross country team captain.

Clayton Hinton is an Eagle Scout whose project was to refurbish the large red bridge in the Watson Woods area. He has attended the Boy Scouts’ National Youth Leadership Training and served as president of church youth groups. He is the concertmaster in the Prescott High School string orchestra and also performs with the Prescott POPS Symphony.

WOMAN OF THE YEAR FINALISTS

Debora Black became Prescott’s first woman Police Chief in 2016, overseeing a three-year reduction in crime. She authorized use of an opioid overdose antidote, resulting in more than a dozen lives being saved. She helped implement arrest alternatives to connect the homeless to needed resources. She also serves on the Board of Central Arizona Boys and Girls Clubs and is a Big Sister.

MAN OF THE YEAR FINALISTS

Jesse Burke is pastor of Sanctuary Covenant Church where he organizes monthly service projects. Jesse helped start Arizona 1.27, a nonprofit that helps children find foster homes and adoptive parents. He is on the board of Agape House, which provides family housing, is the founding president of the youth organization Kind Defined and employs 20 people at the Hancock Barbershop.

Stan Goligoski serves on the Mayors Commission on Veterans Initiatives and is board president of Prescott Community YMCA. Working with federal and Arizona Corporation Commissions, Stan brought broadband lines to more than 72 schools and libraries in Yavapai County, as well as rural sheriff and fire outposts. He also serves with numerous youth and education organizations.

Individual tickets for the dinner are $75 per person and are available online at this link.

Sponsorships are available at this link.