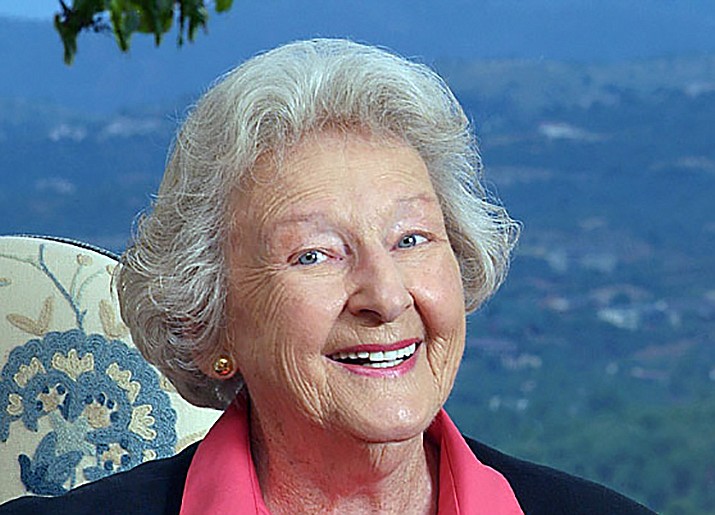 Elisabeth “Bette” Friedrich Ruffner September 17, 1919 — March 13, 2019 On Sept. 17, 1919, in the Mt. Airy neighborhood of Cincinnati, Ohio, Elisabeth Alma Friedrich came into the arms of her parents, Clara and William. World War I was over, and the country was eager for peace and security. Between the flu pandemic, race riots, the anti-communist blacklist and domestic terrorist bombings, peace was elusive. A Constitutional amendment gave women the right to vote, and prohibition became the law of the land. 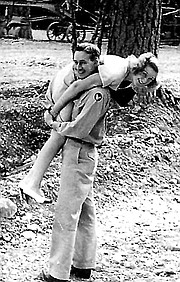 The youngest of three, Elisabeth attended Indiana University and the University of Cincinnati, working toward a medical degree. Her career plans were interrupted by a handsome young man she met on a blind double-date, he with her sorority sister. This dashing fellow, “Budge,” was enrolled in the mortuary college, and he and Elisabeth dated through the spring of 1940. After Budge returned to Prescott, Arizona, plans were made for Elisabeth and her mother Clara to stop at nearby Ash Fork on their way to Los Angeles on business.

Lester Ward “Budge” Ruffner proposed before the week was out, and Elisabeth and he were married on Aug. 10, 1940, at the Ruffner home on Park Avenue in Prescott. With the onset of World War II and Budge in the Army Air Corps for three years, Elisabeth found herself a war bride with a new baby by 1941. She took a job with Dr. Florence Yount, setting up a new laboratory and filling in for the doctor as she traveled the county making house calls. Elisabeth adored the opportunity to work in a medical practice in Prescott, partially fulfilling her career ambitions.

At the end of the war, Elisabeth turned her attention to family life with daughter Melissa, who was then 4, as well as volunteering with the Girl Scouts, and the public library board. Daughter Rebecca was born in 1947, and son George in 1950.

For many years, Budge and Elisabeth worked side by side in the family business, Ruffner Funeral Home, which had come into the family in a storied 1903 Whiskey Row poker game.

Among Elisabeth’s proudest accomplishments beyond her family life was her work in establishing the Yavapai Community Hospital and auxiliary, PEO Chapter Y, the Prescott Arts and Humanities Council, Friends of Arizona Highways, the Rails to Trails program, the Open Space Alliance, and the Friends of the Prescott Public Library.

Bitten early by a deep love of Western historic architecture, Elisabeth incorporated the Yavapai Heritage Foundation, through which funds were quickly raised to save the Bashford House and move it to the Sharlot Hall Museum grounds. That sparked her interest in a growing national movement, which led to her serving as an advisor with the National Trust for Historic Preservation, appointed by President Carter. Some 1,200 buildings in Arizona are now listed in the National Register because of her tireless advocacy to protect and preserve the community legacy they represent.

Elisabeth was recently inducted into the Arizona Women’s Hall of Fame, one of the first living women so honored. On March 13, 2019, surrounded by the love of her family and dearest friends, and in the tender care of Marley House staff, Elisabeth slipped away. She is survived by her children, Melissa, Rebecca and George; grandchildren Dan, Mari, Rebecca, Leila, Chelly, Garrett, Paul and Lily; great-grandchildren Chelsea, Madison, Christopher, Faith, Everly and Merritt; and a great-great-grandson, Christopher. Everyone who has ever known her is hoping that those pearly gates are in good repair or there will be a committee formed.

In lieu of flowers, the family encourages contributions to the Elisabeth F. Ruffner Memorial Fund at Arizona Community Foundation, 300 East Willis St., Prescott, AZ 86301, or online at www.azfoundation.org/ElisabethRuffner. In this way, Elisabeth’s work on behalf of her beloved community can continue in perpetuity.

Ruffner-Wakelin Funeral Home is handling arrangements. For more information, go to RuffnerWakelin.com. A celebration of Elisabeth’s life will be held at a later date.