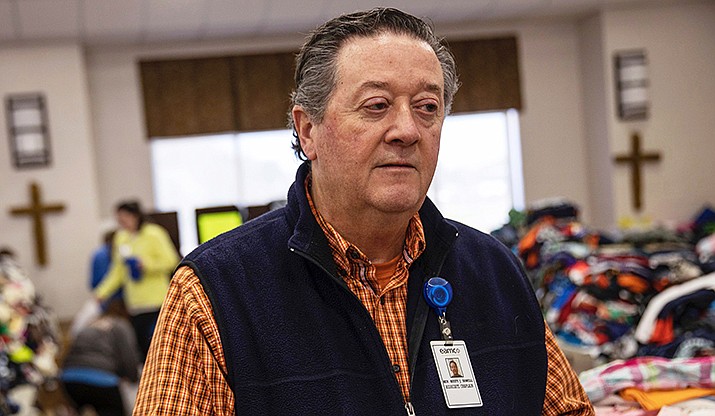 Rusty Sowell, pastor at Providence Baptist Church, speaks to volunteers organizing donations Wednesday, March 6, at the church in Beauregard, Ala. Dealing with the dead became a huge task in a rural Alabama community where nearly two dozen people died in a tornado outbreak. (David Goldman/AP)

BEAUREGARD, Ala. — With nearly two dozen people killed in a tornado outbreak that shattered a rural community in east Alabama, notifying the families of the dead was a huge, gut-wrenching task, done in the privacy of a country church.

Pastor Rusty Sowell, with the county coroner behind him, would put his hand on the door to each Sunday school classroom at Providence Baptist Church, where dozens of family members were told to gather. Inside, people awaited word on whether loved ones were dead or alive.

First they told one family that a relative was dead, and then another. Then there was another and another in a string of heart-shattering gatherings where people heard the worst possible news.

Sowell had preached about the mystery of death and the need for God. Now he focused on the faces of the survivors.

“It was surreal. It was sacred, if I can use that term,” he said.

There were 23 dead in all — 17 meetings with relatives. His eyes reddened Wednesday, March 6, at the haunting memory of simply entering room after room after room.

“The toughest part was opening the door and looking in the eyes of that family member who was hoping against hope that it wasn’t their loved one that had died,” said Sowell, pastor of Providence Baptist. “I would say to myself, ‘Just breathe, just breathe.’”

Coroner Bill Harris’ radio had started crackling with a rising death count within minutes after an EF4 tornado ripped apart the Beauregard community in the deadliest U.S. tornado in almost six years. It was the largest of at least 11 twisters that struck the Southeast on Sunday, weather officials said.

First came confirmation of three deaths, he said, then five, then seven. As the number rose into the double digits, he began setting up a temporary command post at a middle school and called for help.

Once the dead were gathered from fields and roads and splintered homes, each was given a post-mortem examination in a portable autopsy facility set up in the school’s parking lot. The dead were identified either through ID cards, tattoos, scars or photos.

Then came the process of notifying the next of kin at Providence Baptist, just a few miles from where the tornado scoured the ground, littering gullies with pieces of homes and stripping ridges bare of trees.

Many families already knew the worst, Sowell said, but it was still tough for them to hear the words.

Harris said it was easiest to let Sowell, an old friend, enter each room first, followed by another pastor, himself and then a sheriff’s investigator.

As coroner, Harris said, he’s learned to let a pastor or someone else lead the way.

“When you’re the first one in the room they know it’s bad,” he said.

Some cried, Sowell said, and many were in shock. Some leaned on each other; many leaned on God in a community dotted with churches both large and small.

“I saw a lot of love from the family to each other, and a lot of faith. Their faith was holding them up,” he said.

Seven funeral homes in all handled services for the 23 victims, Harris said, and one mortuary prepared 10 bodies on its own.

Sowell moved on to overseeing a disaster recovery operation that is taking in donations and dispensing food, water, clothes, tarps, cleaning supplies and more from a church building across the road from where families learned their relatives had died.

Harris said he hadn’t had time to think about the emotional magnitude of the loss in a county of more than 160,000 people. Relatives said one extended family lost 10 people in all, and officials said as many as 116 homes were destroyed or severely damaged.

“I’m still in go mode,” he said. “Sometimes you just have to put your blinders on and get the job done.”