Gunby: Are there other Arnold Palmer phenoms?
Tee It Up 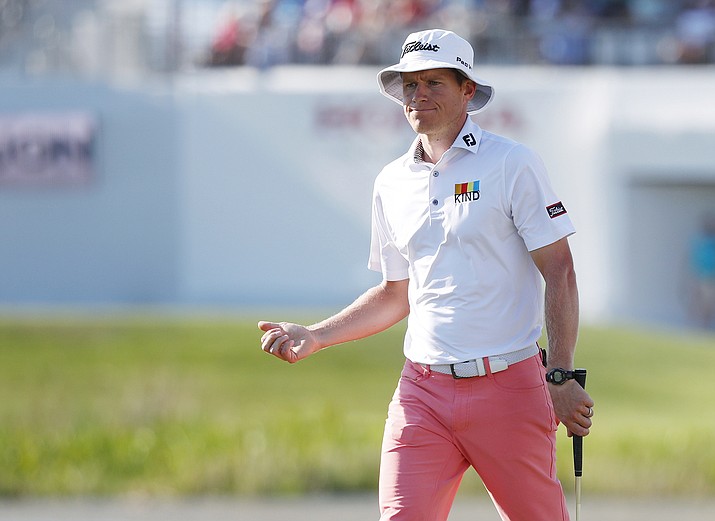 Peter Malnati gestures for the ball to turn toward the hole as he putts on the 17th hole during the third round of the Honda Classic golf tournament Saturday, March 2, 2019, in Palm Beach Gardens, Fla. (Wilfredo Lee/AP)

It was great to see the Tour players honoring Arnold Palmer this past week at the Arnold Palmer Invitational. There have been lots of great golfers, male and female, who have shaped the game of golf, but Mr. Palmer has to have been the most influential in my era. He came from a blue-collar family and encountered some challenges early in his life. His unorthodox golf swing and go-for-broke attitude endeared him to many.

Most importantly, he always came across as a caring and genuine gentleman to everyone he met. Even if those encounters were only a glance, a nod, a personal letter, or a thumbs-up.

I doubt we will ever see another phenomenon that Arnold Palmer brought to the world and the game of golf. I know there are many players on the PGA and LPGA tours who do have some of the qualities that Mr. Palmer showed us. But none of them have the complete package that embodied the aura of Arnold Palmer. He was one-of-a-kind, for sure.

In his last book, “A Life Well Played,” Mr. Palmer discussed many of his life-lesson stories. In the last chapter, “The Final Lesson,” he wrote “…we all have a responsibility to make sure that this great game remains great. Furthermore, I’ve always tried to be a role model, to set a good example, …”

One player on the PGA Tour who is a great role model and I have had the honor to get to know, is not a household name. Peter Malnati and I had a chance meeting at the Waste Management Open three years ago when he was very gracious and accommodating to my Special Olympics golfers who we took to a practice round. He took the time to be nice to my athletes and his sincere and polite demeanor was endearing.

We kept in contact and he has generously assisted the fundraising efforts for our Prescott-area Special Olympics programs and our PGA HOPE (disabled veterans golf) programs. He shows his respect to his good friend and fellow Tour player, Jarrod Lyle, who passed away at age 36, by wearing Jarrod’s signature bucket hat. He gets it — the Arnold Palmer way!

Peter humbly posted on his blog recently “20 year-old me wouldn’t believe where the 30 year-old me is. I’m still playing golf. I still love it. I’m still trying to get better every day. Most importantly, I still have the most amazing group of people around me supporting me. Thank you to my wife, my family, my friends and my fans!”

He goes on to say, “I travel the world with my sweetheart and play a game that I love. I’m going to keep getting better and enjoying this incredible journey.” And, “Don’t worry; Have fun; Play with Freedom.” Follow his journey and enjoy his approach to golf and life, and soon you will be a big fan of his as well.

Are you a caretaker of the dignity of the game? Are you a role model, either as a parent or one who loves golf? Peter Malnati is and so was my dad and Arnold Palmer’s father. And so was Arnold Palmer and many others. Join us on a great journey and have fun influencing others through golf! Make golf great again!

John Gunby Sr. is a columnist for the Daily Courier. Reach him by email at sportsdesk@prescottaz.com.