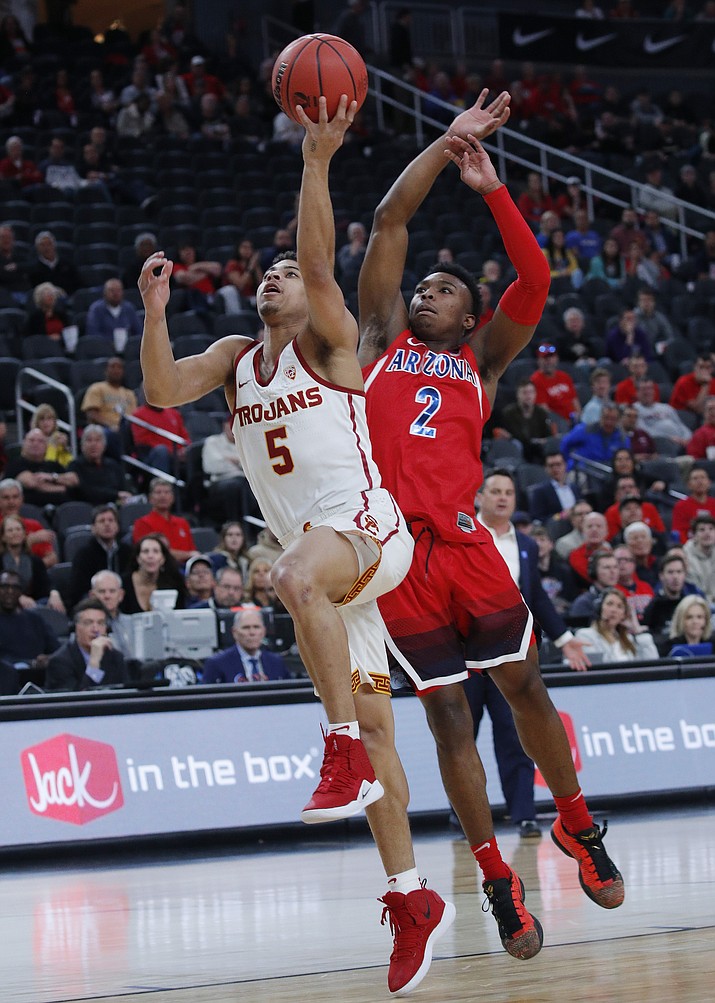 Southern California's Derryck Thornton (5) shoots ahead Arizona's Brandon Williams during the first half of an NCAA college basketball game in the first round of the Pac-12 conference tournament Wednesday, March 13, 2019, in Las Vegas. (John Locher/AP)

Arizona may have reached the end of an era.

Bennie Boatwright had 22 points and 11 rebounds, helping USC roll over Arizona 78-65 in the opening round of the Pac-12 tournament on Wednesday.

“We’re seniors and we wanted to make sure the guys came out and played as hard as they can,” Boatwright said. “This is our last go-around and we want to go as far as we can. They made shots, but we kept playing hard throughout the game.” 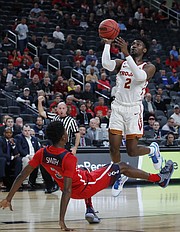 Southern California's Jonah Mathews (2) drives into Arizona's Dylan Smith while shooting in the first half of an NCAA college basketball game in the first round of the Pac-12 conference tournament Wednesday, March 13, 2019, in Las Vegas. (John Locher/AP)

The eighth-seeded Trojans (16-16) started slowly, but went on 18-2 runs in each half to earn a spot in Thursday’s quarterfinals against top-seeded Washington.

Derryck Thornton scored 12 points and USC shot 48 percent to bounce the ninth-seeded Wildcats from the Pac-12 tournament after losing to them in the title game a year ago.

Arizona’s difficult season may have come to an end with its first opening-round Pac-12 exit since 2010.

The two-time defending champion Wildcats (17-15) continued to be embroiled in a recruiting scandal and struggled on the court, punctuated by their lopsided loss to the Trojans.

Unless Arizona gets an invite to a smaller tournament, it will not play a postseason game for the first time since 1983-84, Lute Olson’s first year as coach.

The school also must decide the fate of coach Sean Miller. He has repeatedly been linked to the recruiting scandal and will be subpoenaed in a federal trial next month.

Miller stuck to his stance of not commenting on questions concerning the scandal or his job, saying “No” when asked if he thought this was his last game at Arizona.

“Our room for error was so slight that it really stole our confidence to some degree and didn’t allow us to be maybe the best overall team that we could have been,” Miller said.

The Wildcats dug a big early hole, fought back by halftime and fell behind by double digits midway through the second half. Ryan Luther scored 16 points and Brandon Williams 13 for the Wildcats, who went 5 for 22 from the 3-point arc.

The Trojans closed out a disappointing regular season with four straight losses and seven in nine games.

Arizona ended with a similar thud, losing to rival Arizona State for its ninth loss in 10 games.

USC won the teams’ lone meeting this season, rolling over the Wildcats 80-57 at home.

“They were playing really hard and when you do that, you disrupt a lot of things,” Arizona’s Ira Lee said.

But instead of racing off to another rout, USC started sputtering, allowing Arizona back in it. The Wildcats went on a late 13-3 run and tied it at 40-all by halftime. Arizona made 13 of 26 first-half shots after shooting 28 percent the first game against USC.

USC took control midway through the second half, using with another 18-2 run to go up 63-45.

“I thought defensively we picked it up and we were able to challenge most of their shots and rebound the basketball,” USC coach Andy Enfield said.

Arizona was out of sorts for long stretches in each half and could face a long offseason if it doesn’t get a postseason bid.

USC moves on to face top-seeded Washington the quarterfinals.

Arizona waits to see if it will get an invite to a smaller postseason tournament.