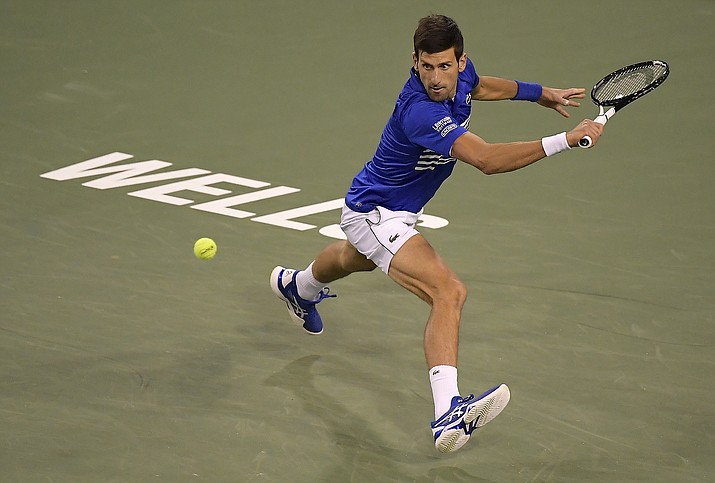 A small ATP charity fundraising event held in Tucson in 1975 moved to the Mission Hills Country Club in the Coachella Valley, California, in 1976 as a regular ATP tour event.

It gained enough success to need new and larger facilities, which were built in 1981 at the La Quinta Resort, now directed by former touring professional/ATP board member Charlie Pasarell who had a Disney vision to create a combined top men’s and women’s tennis event.

His dream and plan was to make the event a place where the players and fans wanted to come. With that they needed a solid sponsor and media base, modern and ample facilities that were pleasing/impressive and where more day and evening tickets could be sold.

With good competition and the top men and women playing side by side, the event got great media coverage through print and broadcasting services -- even with the tournament site 90 miles from any major city.

So from 1981 until 1986 Pasarell achieved those lofty goals, to the point he outgrew the facilities at La Quinta. For continued growth he now needed a larger and even more modern facility with a permanent tennis stadium and better fan/player facilities.

Pasarell formed a partnership with friend Ray Moore, and PM Sports Management took over the event with other investors. In 1986-87, a larger facility called the Grand Champions Hotel was built, which could accommodate both venues.

Part of Charlie and now Ray’s success is an eye for detail, utilizing a great base of volunteers for this two-week short but laborious event, and it seems when they needed an influx of financial help it involved people who knew the tennis industry and understood what it would take to reach the next rung realistically.

The fifth site of this event’s journey was the vision of yet one more move to what would become the Indian Wells’ Tennis Garden on 57 acres. It opened in 2000 with a 16,000-person stadium built, plus another seven championship courts, practice courts (29 courts in all), courtyard/tennis garden, a slew of vendors, etc., to accommodate what would become the fifth-largest tournament in the world.

Mark McCormick (IMG); Bob Kain, and later George Mackin; Bob Miller (Tennis magazine) and then a team of big-hitting tennis investors helped save the day when things could have gone a whole other direction.

In 2009 another twist took - the tournament was sold to Larry Ellison for approximately $100 million dollars. As one of the richest men in the world and having his own ideas toward making this as big or bigger than the other four grand slams, he has run with the ball. A second stadium court that holds 8,000 fans was built; permanent quality restaurant space was added; Hawkeye was installed on every tournament court; two 19,000-square-foot shade structures were created; Stadium 1 was refitted with new chairs, refurbished suites, 35 food outlets and upgraded player facilities. Also, more acreage was purchased for parking.

In the last 43 years, the number of fans for this two-week event has gone from 30,000 to more than 450,000, which eclipses a couple of the majors. It has become a tennis festival of the best men and women singles and doubles tennis players in the world, which is more than just a major tournament, it’s a most respected “tennis happening.”

It costs a little more than it did 20 years ago to attend with tickets and parking, but it must be going in the right direction because we all look forward to going each year.

A big thanks to those who have brought a tournament of this magnitude to our neck of the woods -- it’s a long haul to the U.S. Open from the this section of the U.S., and it’s great to have one of the best tennis sites in the world with the top men and women tennis players to view for two weeks and the full tennis experience to enjoy at the Indian Wells Tennis Garden.

Howard: ‘The bigger the challenge, the harder I try’
Column: Can it really get any better - Indian Wells, BNP Paribas Open 2016
Column: Indian Wells truly has become the fifth Grand Slam
Column: Tennis In Wonderland at the BNP
Column: Visiting the big show at Indian Wells