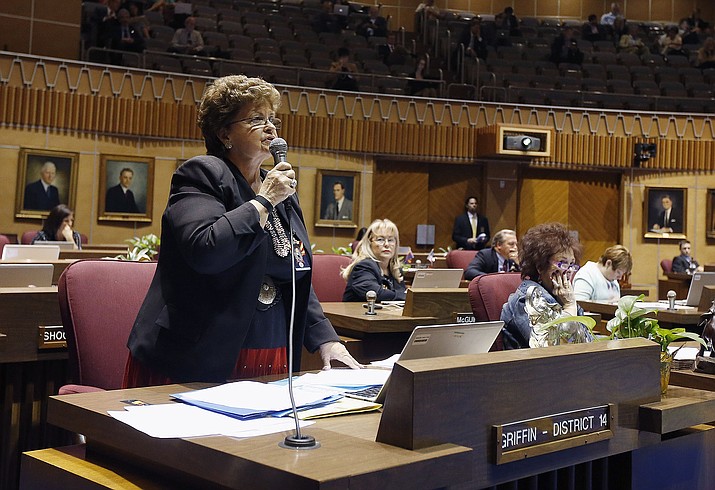 Rep. Gail Griffin, R-Hereford, said a bill to exempt a portion of veterans’ military pensions could have helped the state attract more retirees to the state. (Ross D. Franklin/AP, file)

PHOENIX — It looks like retired military are not going to be getting a bigger state tax break.

On a 35-25 margin, the House on Monday killed a proposal by Rep. Gail Griffin, R-Hereford, to allow those with military pensions to exempt the first $5,000 of that from income taxes.

Griffin originally had sought to boost that in three steps to $10,000. When that proved politically unacceptable she agreed to the $1,500 boost.

Even with that change, however, a majority of legislators questioned the wisdom of the move.

What’s wrong with House Bill 2011, he said, is it does not target its relief to “those who need our help.’’

“No veteran I know of thinks the rest of us should carry a special burden because of their service,’’ Allen said. “They served because they believe in this country and what they did.’’

Griffin, however, said foes were missing the point.

“This is an economic development bill,’’ she told colleagues.

Griffin acknowledged that increasing the exemption for veterans did come with a price tag in lost state revenues that she pegged at about $2 million a year. But she said that could be offset if the change attracts more retirees to the state, people who would pay other taxes on the things they buy.

“We’re not asking for anything,’’ he said. “We’ve served our country.’’

But Blackman, in voting for the measure, said lawmakers need to recognize that Arizona is in competition with other states for attracting military retirees.

“A lot of my friends that I’ve served with over the years that have retired and are retiring choose not to come to Arizona because Arizona is basically at the bottom of the list when we’re talking about supporting veterans,’’ he said.

“This is one of the few bills we have down here to give money back to people,’’ he said.

The tax break, at least on an individual basis, would be moderate.

Assuming an average tax rate of 3 percent, boosting the exemption by $1,500 would save someone about $45 a year.

Monday’s vote does not bode well for the future for the more comprehensive Senate Bill 1157. That measure, which cleared the Senate last month on a 16-14 vote, would exempt a veteran’s entire military pension from state income taxes, with a loss of tax dollars estimated at $43.5 million.