Reynolds: Open space at the center of AED-Dells debate
Talk of the Town 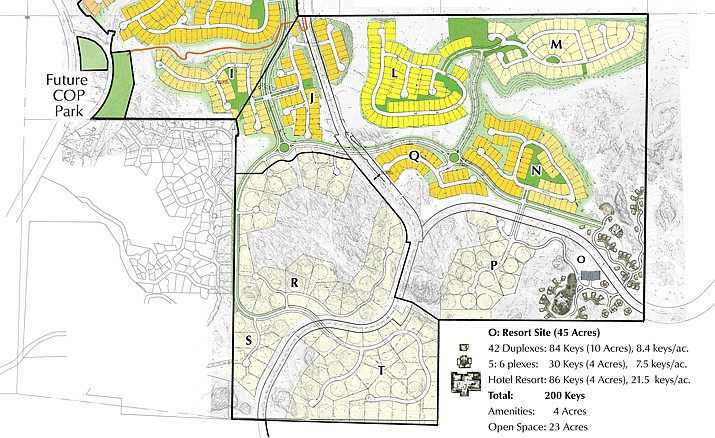 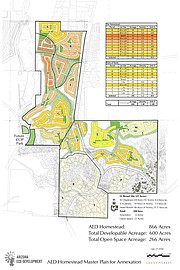 Open space at the center of AED-Dells debate. (City of Prescott/Courtesy)

The Daily Courier’s article (Feb. 15) on the Dells and annexation plans by Arizona Eco Development (AED) raised several interesting issues. The City of Prescott staff’s recent discussions with AED reached an impasse. AED will submit a modified version of their plans shortly, including a new map.

See their previous map for the AED Homestead development with this column or CLICK HERE.

This colorful map is hard to interpret. There’s no legend so where open space is planned isn’t knowable — one of the explanations why this annexation plan wasn’t acceptable. The map doesn’t show the important stream through the heart of the Dells, nor existing minor roads. See for yourself!

A main reason why Prescott is a destination city for tourists is its outdoor recreation opportunities. Tourists bring in significant amount of city revenue through money spent at hotels, restaurants, shops, gas stations — sales taxes. The Peavine Trail past the Point of Rocks, the Dells’ scenic center, is a major attraction. Locals heavily use this trail too.

Jason Gisi of AED stated earlier that his plans would recognize the importance of the heart of the Dells and provide realistic open space. His current plans belie that promise. The map shows houses backing right onto the Peavine and Iron King trails, and multiple roads across these trails with resulting traffic. Currently no roads cross the Peavine from its southern trailhead (close to Prescott Lakes Parkway) until it is through the Dells — 4.5 miles north. One exception is the private Storm Ranch Road to the Seaver’s residence, a few vehicles daily at most — a STOP sign at the trail. AED’s new roads will be accidents waiting to happen to kids and other trail users.

Gisi should recognize that he must provide more open space to achieve the considerable advantages of annexation. The city manager indicated a reason why discussions with Gisi failed was insufficient open space.

The minimum requirement for large developments is 25 percent but the special nature of the Dells suggests a larger percentage. The mayor has mentioned around 50 percent. Over 5,000 signatures on the petition to the city by citizen advocates underlines this.

The City Council members must realize they were voted in to serve the public, so must consider what the public wants, and impose reasonable zoning requirements. Five-hundred acres of open space in the heart of the Dells is reasonable considering AED owns over 15,000 acres total, and will want this annexed at later dates.

Nigel Reynolds is a resident of Prescott and writes the Amazing Places column for the Courier.

Editor’s Note – The Save the Dells effort to preserve 500 acres in the heart of the Granite Dells is scheduled to go to the Prescott City Council for a vote on March 26.