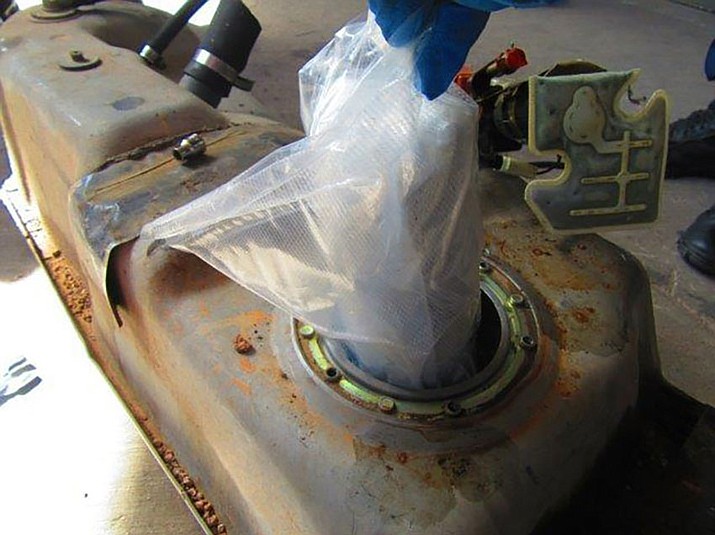 Officers located meth within the gas tank of a smuggling vehicle. (U.S. Customs and Border Protection/Courtesy)

According to a news release, Border Patrol officers at the Dennis DeConcini Crossing stopped a 37-year-old Hermosillo, Sonora, Mexico, man for a further inspection of his Ford truck when he attempted to enter the U.S. from Mexico on Friday morning. Following an alert by a narcotics detection dog, officers found nearly 57 pounds of methamphetamine, worth an estimated $171,000.

About an hour later, a drug detection dog at the Mariposa Crossing alerted to a Jeep SUV that was crossing back into the U.S. from Mexico. A 24-year-old man from Nogales, Mexico, was found with several packages of drugs throughout the vehicle. The drugs were identified as more than five pounds of cocaine, worth more than $121,000. CBP officers also seized nearly 21 pounds of meth, worth nearly $63,000; more than six pounds of heroin, worth $164,000 and more than a pound of fentanyl, worth almost $16,000.

Officers seized the drugs and vehicles. The men were arrested and then turned over to U.S. Immigration and Customs Enforcement’s Homeland Security Investigations.