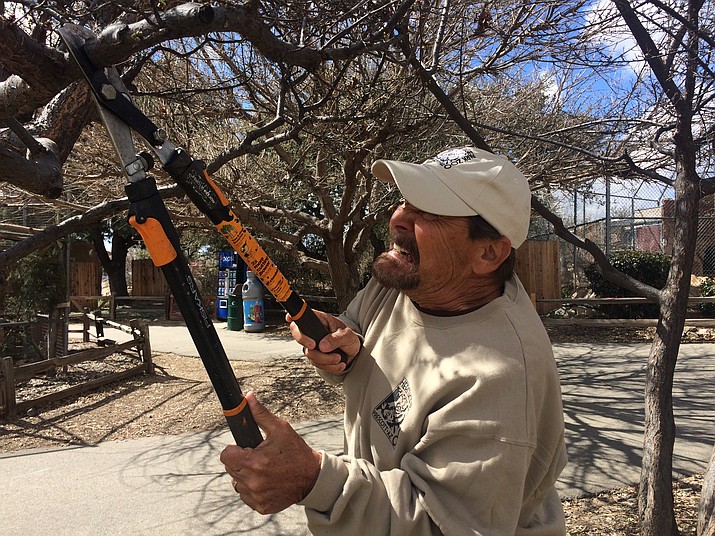 The Heritage Park Zoological Sanctuary flew past its $30,000 goal for the “Lew Loves the Zoo” fundraiser, increasing the total for the week to $42,565.37 as of Thursday afternoon, March 7, the final day of the event.

Money was still coming in, so that total is going to keep growing in the next few days, said Ron Brashear, marketing and events coordinator for the zoo.

“This last winter has really been a little bit rough and we’ve had to scrape by for several weeks, even into the months,” McLaren said. “When the weather is not playing in our favor then visitation is low, so this funding will completely get us through the winter and allow us to do some of the needed improvements that we need. Not only that, but for the animals’ sake, they obviously need the operational food and necessities.”

Stidham says he makes sure the bathrooms are clean and that everything looks prim and proper when the zoo opens. Then he moves on to an unending list of things that need to be taken care of, prioritizing what he tackles first. Meanwhile, Goedeker noted most of his job is construction, building what needs to be built.

Sometimes a lack of equipment keeps things from being done, but they push along, Stidham said. Further, the zoo has a good group of volunteers right now, but it could use more to help with maintenance.

“Most people like to be with the animals, so we don’t see too many volunteers,” Stidham said.

Volunteers for facilities work must have experience in the area or a willingness to learn, appropriate clothing and shoes and a flexible schedule. To volunteer, or for more information about volunteering, call 928-778-4242 ext. 23, email volunteer@heritageparkzoo.org or visit www.heritageparkzoo.org.

Rees said the week has been a tremendous experience. When the initiative began, no one knew exactly what to expect, but hoped it would help the zoo, he said. Not only has he learned a lot through the educational process, but he is happy with the turnout of people who care, Rees said. One of the most interesting things he has learned over the week is that the zookeepers are the most dedicated and fascinating people, Rees said. The animals know who they are, he said.

“You think a wild animal wouldn’t know a human being, but these zookeepers know these animals … kind of like their own kids,” Rees said. “They know their actions, they know how they’re going to react and the animals respond to them.”

Rees said he can definitely see “Lew Loves the Zoo” having a residual effect for months to come as far as donations, awareness and the message of Heritage Park Zoological Sanctuary being a wonderful treasure in Prescott’s backyard being passed along.