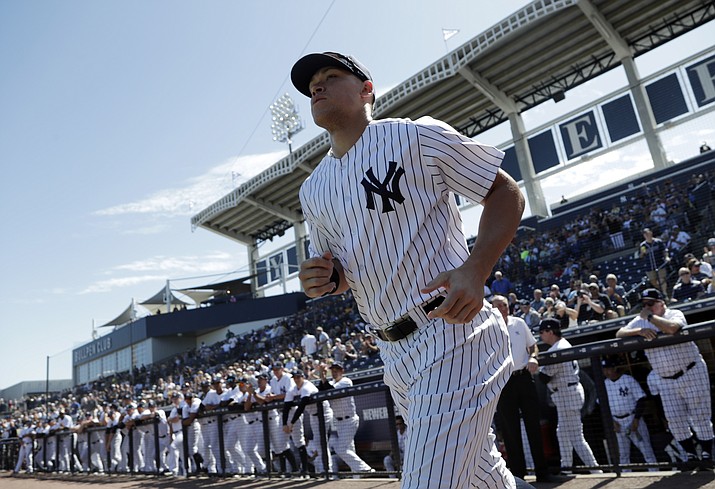 Judge hit his first two homers of spring training, helping the New York Yankees to a 7-1 victory over the Detroit Tigers in a split-squad game on Sunday.

Gardner and Judge hit consecutive homers off Daniel Norris in the first. Judge went deep again in the fifth, belting a two-run drive to right that went off the glove of a leaping Victor Reyes and just over the wall.

Norris allowed three runs and four hits in 1 2/3 innings. The 25-year-old left-hander is trying to win a spot in Detroit's rotation.

"Just trying to throw strikes and stay out of the middle of the zone, which I didn't do very good today," Norris said.

Masahiro Tanaka tossed three scoreless innings for the Yankees in his first spring start. Traditionally one of baseball's most deliberate workers, the right-hander had no issues with baseball's new 20-second pitch clock.

"Yes, I was conscious of that," Tanaka said through a translator. "It's something MLB is testing during spring training and it might come into effect once we get into the season. You don't want to be not prepared if that were to happen."

Pablo Reyes homered for Pittsburgh. Mitch Keller, a second-round pick in the 2014 draft, gave up four runs in one inning.

Adam Duvall homered twice for Atlanta, and Tyler Flowers also went deep. Sean Newcomb struck out three in three scoreless innings, and Arodys Vizcaino struck out the side in his inning of relief.

Juan Lagares had three hits, stole a base and made an impressive catch in center field with his back to home plate. Lagares won a Gold Glove in center field in 2014 but is struggling to find a place in a crowded Mets outfield.

Dominic Smith, battling for the starting first base job for New York, belted a mammoth three-run drive and finished with three hits. Travis d'Arnaud made his first start since Tommy John surgery last season and went 1 for 3 with an RBI.

Max Kepler and Lucas Duda each had two hits for Minnesota, and Jonathan Schoop homered. Jose Berrios gave up two runs in 2 1/3 innings.

Domingo German struck out four and allowed just one hit in 2 2/3 innings for the Yankees. Luke Voit hit a solo home run.

Mike Trout and Albert Pujols hit back-to-back home runs for Los Angeles. Taylor Ward, a first-round pick in 2015 by the Angels, went 3 for 3 with two doubles.

Anthony Santander had three hits, including a three-run homer, for the Orioles. Andrew Cashner gave up four runs and six hits over three innings.

Giants starter Dereck Rodriguez gave up a run in three innings. Buster Posey caught for the second time this spring after undergoing major hip surgery last season and had a hit in two at-bats.

Dodgers right-hander Kenta Maeda gave up three runs in two innings. Kenley Jansen worked a clean inning and Joe Kelly gave up one hit in his inning of relief.

Rangers starter Lance Lynn struck out five but was charged with five runs in 2 2/3 innings. Matt Davidson hit his third home run of the spring.

Rougned Odor homered and drove in two runs for Texas, and Asdrubal Cabrera went 2 for 4 for the Rangers. Brock Burke struck out three in two hitless innings.

Sam Hentges worked two innings for the Indians, striking out three and walking one. Leonys Martin and Carlos Santana homered.