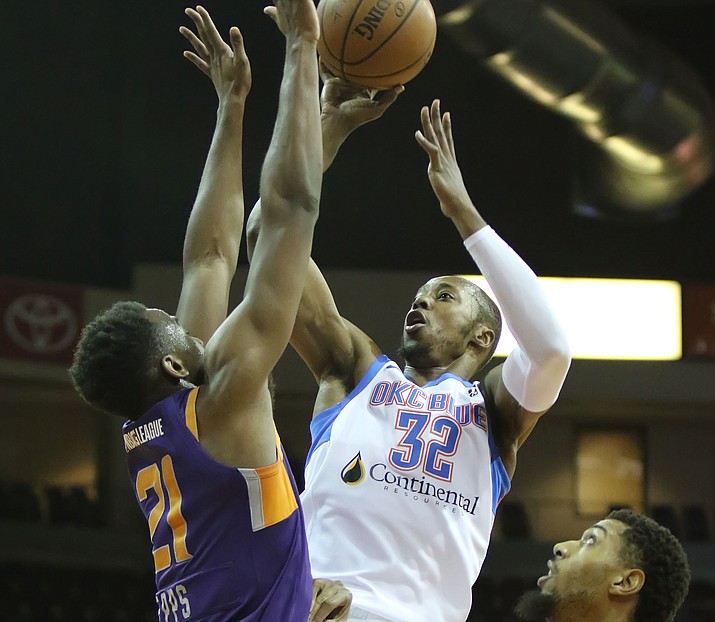 OKLAHOMA CITY, Okla. – The Northern Arizona Suns had vengeance on their minds having just lost to the Oklahoma City Blue on Friday, but they couldn’t get much going all day in their 116-93 loss.

The Suns were swept by the Blue 3-0 in the season-series, marking the first sweep for either team in series history. The Suns (9-34) have lost three straight overall and six straight on the road. The Blue (28-15) maintained their position in the third seed in the Western Conference by winning their third straight game.

Northern Arizona had started their previous four games well, scoring 30+ points in their last four first quarters. Sunday at the Cox Convention Center proved a different story, as the Suns scored just 15 points on 6-of-23 (.261) shooting, turning it over eight times to find themselves down 19 quickly. They came out in the second with great fight, forcing the best shooting team in the NBA G League to a 5-of-19 (.263) clip, getting it to a five-point game, 50-45, at halftime.

It remained a tight game through most of the third quarter. The Suns got within two points with 3:18 remaining in the frame, but the wheels fell off from there in their wire-to-wire loss. They were outscored 50-29 in the last 15 minutes.

George King led the Suns in scoring for the 14th time this season with 18 points on 7-of-14 shooting, including 3-of-6 from distance. He also added six rebounds, three assists, a steal and a block. Hollis Thompson barely missed out on a double-double, recording 10 points, nine rebounds and four assists. Retin Obasohan scored 13 points, while Daxter Miles Jr. led the bench with 12 points, to go with four rebounds. ShawnDre Jones scored a career-high 10 points, also dishing three assists.

The NBA Slam Dunk champion Hamidou Diallo was assigned from the Oklahoma City Thunder earlier in the day, and he led the Blue with 21 points (9-10 FT). He also recorded seven rebounds. Kevin Hervey and Scotty Hopson put up 16 points apiece. Deonte Burton had 14 points. Donte Grantham led the team with 10 rebounds to go with nine points.

The Suns will play their last road game of the season on Tuesday at the South Bay Lakers at 8 p.m.

The Blue will next host the Stockton Kings on Wednesday at 10 a.m.