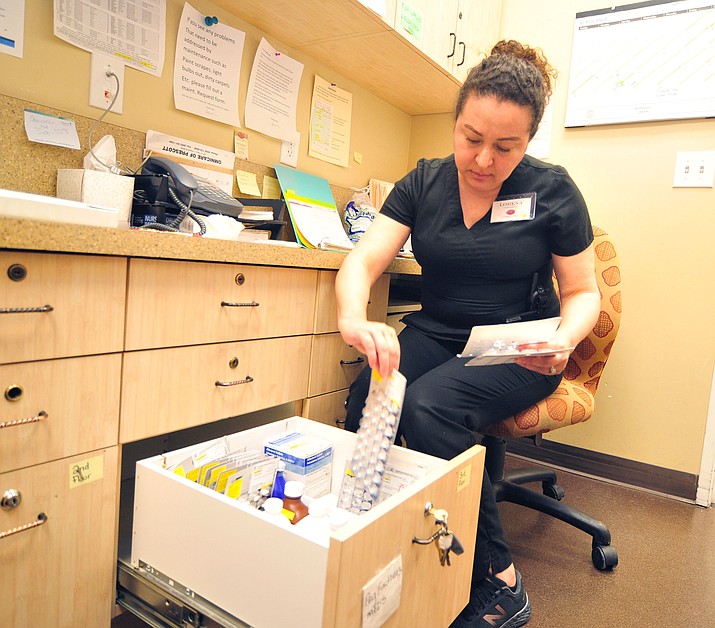 Alta Vista caregiver Lorena Chavez gets prescription drugs for a resident from a locked drawer in her office in Prescott on Tuesday, Feb. 27, 2019. (Les Stukenberg/Courier)

The theft of 236 prescription narcotic pills from Arizona Pioneers’ Home in Prescott about two months ago has startled local health care professionals and raised questions of how something like this could happen.

“I don’t see how any med, least of all [narcotics] at the [Arizona Pioneers’ Home] could have gone missing,” said Maggie Greenwood, executive director at Alta Vista Retirement Living. “If you’re following state regulation, there should be no reason you ever lose meds.”

Though the investigation into the theft is ongoing, Prescott Police Department spokesperson David Fuller told the Courier in late January that an unknown suspect stole the medication from one or more medical carts in the facility sometime between Dec. 19 and Jan. 6.

Ted Ihrman, who was appointed as the interim superintendent for the Arizona Pioneers’ Home in early February, said he won’t comment on the investigation. He did say, however, that in his nine years working for the institution before his retirement about a year and a half ago, nothing like this had occurred.

“To the best of my recollection, we never had a single med error documented or recorded by the Department of Health Services,” Ihrman said.

HOW MEDICATIONS ARE MONITORED 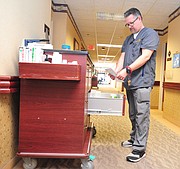 Assisted living facilities in Arizona are regulated by the Arizona Department of Health Services (ADHS).

One of the fundamental rules laid out by ADHS on how these facilities manage and administer medications includes keeping them locked in either a room, closet, cabinet or self-contained unit when unsupervised by someone certified to handle them. Another is if a medication error is identified by a caregiver or nurse, then it must be immediately reported to the medical practitioner who ordered the medication.

Narcotic medications — such as the ones that were stolen — are held to an even higher standard of accountability. They must be double locked when not being handled, such as in a locked cabinet that is in a locked room or medical cart.

Each facility has its own policies and procedures to ensure medications are accounted for, but most use similar protocols.

For instance, both Alta Vista and Las Fuentes have their medical technicians count the narcotics at every shift change to ensure they are all there.

“If one goes missing, it’s very quick to find out where it went,” Greenwood said.

Ihrman said the Arizona Pioneers’ Home is no different in this practice.

Somewhat unique to the Arizona Pioneers’ Home, however, is that it is exempt from state health care facility licensing, meaning ADHS doesn’t regulate how prescription medications are secured and distributed at the institution. Ihrman doesn’t know exactly why the exemption exists, but believes it is tied to the facility’s history of serving disabled miners and aging settlers who moved to Arizona to help establish the territory.

The exemption, listed in Arizona Revised Statute 36-402, does stipulate, however, that “the department of health services shall evaluate the health and sanitation conditions at the Arizona Pioneers’ home annually using the standards applicable to licensed nursing care institutions.”

A bill is currently being considered by the Arizona Legislature to remove the exemption for licensure at the Arizona Pioneers’ Home.

McGee said the amendment was requested by the ADHS so that the department can keep a better eye on Arizona Pioneers’ Home, field complaints from its residents and intervene in its operations when necessary.

“The key to the licensure is ensuring the safety of the pioneer home residents,” McGee said.

The bill has passed through the Senate and is currently waiting for a hearing in the House of Representatives.