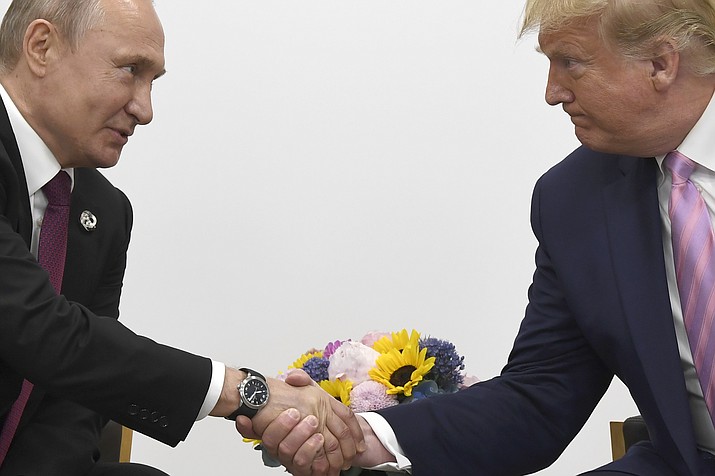 OSAKA, Japan — Smiling together on a global stage, Donald Trump and Vladimir Putin cheerfully dismissed Russian interference in U.S. elections, shared their contempt for the world's news media and generally flaunted their personal bond on Friday.

That was one day after the Russian leader praised the president of the United States for his nationalist world views and vigorously declared the days of the West's liberals are dying if not already dead.

For some time, Trump has defied the once-entrenched Republican distrust if not outright hatred of the powerful nation at the heart of the former Soviet Union. But Friday's joint appearance seemed to go even further.

As the two leaders sat down for their first meeting in nearly a year, a reporter asked Trump if he would warn Putin not to meddle in America's upcoming 2020 election.

"Of course," the president replied. Then he turned to Putin and facetiously said, "Don't meddle in the election." He playfully repeated the request while pointing at Putin, who laughed.

The exchange at the Group of 20 summit in Osaka echoed one of the defining moments of Trump's presidency from a year ago in Helsinki, Finland. There, Trump pointedly did not admonish Putin about election interference and did not side with U.S. intelligence agencies over his Russian counterpart.

Putin disputes special counsel Robert Mueller's conclusion that Russia interfered in the 2016 U.S. election to help Trump win. Putin told the Financial Times this week that it was "mythical interference."

"What happened in reality? Mr. Trump looked into his opponents' attitude to him and saw changes in American society and he took advantage of this," Putin told the newspaper.

Putin, who has highlighted populist movements in Europe and America, praised Trump for trying to stem the flow of migrants and drugs from Mexico and expressed a view that liberalism — the main political ideology in the West since the end of World War II — has outlived its days.

"This liberal idea presupposes that nothing needs to be done — that migrants can kill, plunder and rape with impunity because their rights as migrants have to be protected," Putin said, playing into issues Trump is emphasizing in his re-election campaign.

"The liberal idea has become obsolete," he said in the interview.

The two leaders also bonded Friday over their mutual disdain for "fake news."

Trump eyed the reporters at a photo opportunity with the Russian leader and told him, "Get rid of them, fake news. You don't have the problem in Russia. We have it; you don't have it."

Putin responded, "Yes, yes, we have it. The same."

The two men shared a laugh at that before sitting down for their first face-to-face discussion since the Mueller report was issued in April. The special counsel concluded that Moscow extensively interfered in the 2016 presidential campaign but said he could not establish a criminal conspiracy between Russia and the Trump campaign.

Senate Minority Leader Chuck Schumer criticized Trump for kidding around about election meddling. He said the joke is on America and "Putin's the only one laughing."

Former President Jimmy Carter had even harsher words. The Democrat said he believed Russian interference put Trump into the White House, though he didn't elaborate.

"There is no doubt that the Russians did interfere in the election," Carter said at a human rights discussion in Leesburg, Virginia. "I think the interference, though not yet quantified, if fully investigated would show that Trump didn't actually win the election in 2016. He lost the election and was put into office because the Russians interfered."

In Japan, Trump told reporters that "many positive things" would come out of his good relationship with Putin, who invited him to visit Russia next year to mark the 75th anniversary of the allied victory in World War II.

The friendly tone of Putin's exchange with Trump stood in sharp contrast to the Russian leader's frosty meeting Friday with outgoing British Prime Minister Theresa May.

May again confronted Putin over the March 2018 nerve agent attack on double agent Sergei Skripal and his daughter Yulia in the British city of Salisbury. The two spent weeks in critical condition but eventually recovered. Britain has accused Russia of poisoning them with the nerve agent Novichok, which Moscow has denied.

Before their meeting — their first since poisonings that also resulted in the death of a British citizen — May said Britain would push for the two Russian military intelligence officers accused of involvement in the attack to be brought to justice. She told Putin during the meeting that "there cannot be a normalization of our bilateral relationship until Russia stops the irresponsible and destabilizing activity," according to Downing Street.

Putin has insisted that Russia had nothing to do with the poisoning and argued that bilateral ties were far more important than "the fuss about spies not worth five copecks."

While Trump has long placed a premium on establishing close personal ties with Putin, the president has disputes with Moscow, too. The Trump administration has increased sanctions and other pressures on the Russian government.

The United States and Russia also are on opposing sides of a crisis with Iran, which is accused by the U.S. of shooting down an American drone. Trump nixed a possible retaliatory airstrike but says the U.S. remains firm that Tehran should not have nuclear weapons and must stop supporting militant groups.

At a summit last November in Argentina, Trump canceled his meeting with Putin over Russia's seizure of two Ukrainian vessels and their crews in the Sea of Azov. Those crew members remain detained, yet Trump opted to forge ahead with the Osaka meeting. He said Friday alongside Putin that the fate of the sailors had yet to be discussed.

The leaders both have announced their withdrawal from a key arms control pact, the 1987 Intermediate-Range Nuclear Forces Treaty. It is to terminate this summer, raising fears of a new arms race. Another major nuclear agreement, the New Start Treaty, is to expire in 2021 unless Moscow and Washington negotiate an extension.

The White House said after Friday's meeting that the leaders agreed to keep talking about a "21st century model of arms control," which Trump said needs to include China. In addition to Iran, the two leaders also discussed Syria, Venezuela and Ukraine. The U.S. and Russia are on opposing sides on those three issues, too.

Trump adviser sees having Putin summit as ‘a deliverable’
Intel officials say Russia boosting Trump candidacy
Trump and Putin's RSVP's: Yes, for sure, if, if if. ...
US gets tougher on Russia; new sanctions, accusations
Trump returns from summit with Putin to forceful criticism
Event Calendar